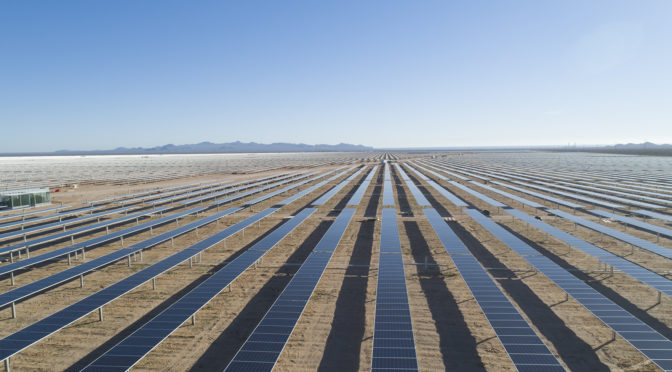 ACCIONA today announced the signature of an agreement with the US company Tenaska to acquire a portfolio of photovoltaic projects in seven States across the country. The portfolio comprises approximately 3,000 megawatts (MW) of rated power in utility-scale photovoltaic plants and 1.000 MW of battery storage.

ACCIONA is a global operator in renewables with 30 years’ experience in the sector and over 9,851 megawatts (MW) under its ownership, spread across 16 countries on the five continents. It has 224 wind farms, 76 hydropower stations, 6 large photovoltaic plants, 3 biomass plants and a Concentrated Solar Power plant. The company markets energy to large clients.

The transaction covers 20 projects located in the States of Pennsylvania, Ohio, Kentucky, Illinois, Kansas, Oklahoma and Missouri, within the scope of the PJM Interconnection and Southwest Power Pool (SPP) markets.

“This operation represents an opportunity for ACCIONA to increase our commitment to renewable energy and sustainability in the United States through photovoltaic and energy storage technology, after the investments we have already made in wind power”, says Rafael Esteban, ACCIONA’s Energy Division director, North America. “We will materialize a large part of the projects between 2021 and 2023”.

Tenaska – through Tenaska Solar Ventures, the company’s solar development services business – will work with ACCIONA to complete development of the projects.

“We are excited to join forces with ACCIONA on this renewables portfolio, pairing Tenaska’s extensive expertise in development with their origination and construction capabilities,” said Steve Johnson, senior vice president and leader of Tenaska Solar Ventures. “This transaction highlights Tenaska’s ability to monetize our team’s knowledge and skill sets while operating under various development models.

ACCIONA plans to put eight projects from this portfolio into service before the end of 2023, adding around 1,500 MW of peak power (some 1,200 MW of rated power) to its renewable energy assets in North America, where it already has more than 1,245 MW of wind power capacity installed or under construction. The company also owns and manages a 64-MW CSP (concentrated solar power) plant near Las Vegas.

The addition of a 1,000- MW energy storage development portfolio allows ACCIONA to offer cutting-edge technologies and services to these U.S. markets.

Globally, ACCIONA owns and operates around 10,000 MW of renewable energy capacity worldwide, in 16 countries on the five continents.

Thanks to its ever-lower costs, modular nature and ease of installation, photovoltaic energy plays an increasingly important role in ACCIONA’s renewables portfolio. At the end of the first semester of 2019, the photovoltaic facilities owned by the group -either operational or under construction- totaled 1,207 MWp, i.e. 11% of the company’s total renewables assets, making this technology the second biggest in terms of capacity after wind power.

Photovoltaic solar energy has seen a spectacular rise in the USA, doubling installed capacity between 2015 and 2018, a year that ended with around 49.6 GW installed and a growth forecast of up to 120 GW by 2030. Energy storage technology is also expected to show exponential growth in the country in the next few years.