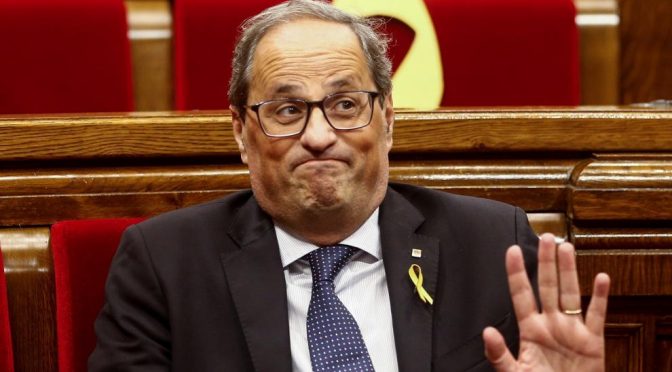 Although the mantra is recurrent by the separatists of Catalonia over a vast majority of Catalans want independence, the truth is that reality is not as the account. The results of the polls and the data of the last Center of Opinion Studies (CEO) of the Generalitat not specifically these desires.

While it is true that for the first time an independence party -ERC- had won the general elections in the last elections of April 28, the votes to the independence parties only obtained 39% of the support. That is, four out of ten votes of the voting population went to the separatist parties -ERC, JxCAT, mainly-. On the other hand, the constitutionalist parties – PP, PSC and Citizens, mainly – obtained 43% of the total issued in Catalonia. The remaining 17.4% includes an In Common Podem (supporters of a self-determination referendum but without clear positioning on independence) and minority parties that do not rule on this issue.
Likewise, the CEO’s last barometer, known as the Catalan CIS, which came out in July, leaves unfavorable conclusions for separatists.
Catalan independence movement is in the minority among the Catalans themselves. According to the survey, 48.3% of Catalans reject that Catalonia becomes an independent state, while 44% support, 5.5% do not know and 2.1% do not answer.
It is the second time since June 2017 that a CEO survey indicates that there are more Catalans against independence than in favor, and they have reversed the positions regarding the last barometer of March 2019: then 48.4% supported independence and 44.1% rejected it.
In addition, in recent months there are fewer Catalans. Those who believe themselves as Spanish as Catalans have gone from 32.9% to 41.2%, which is 8.3 points more. Conversely, those who saw more Catalan than the Spanish have been reduced since May 2018 by 5.4 points, from 22.8% to 17.4%. And those who only declare themselves as Catalans sink from 28.1% to 20.1%, an eight-point decline. That is, that Catalans who do not recognize even a pinch of Spaniards have been reduced by almost 30% since the president of Carles Puigdemont acceded to office.
How many separatists are there in Catalonia? Less than 44%