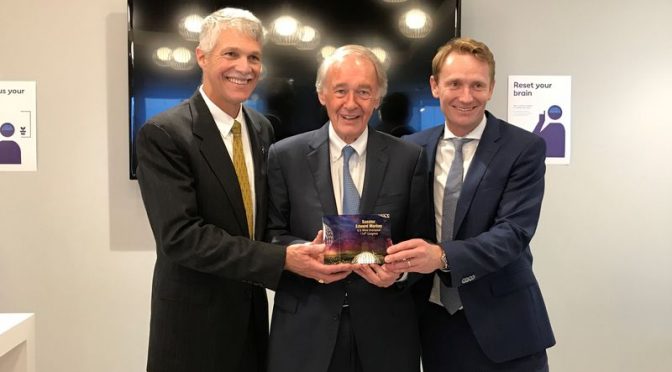 AWEA presents awards to Members of Congress who exemplify America’s leadership and support for wind power.

Senator Ed Markey (D-Mass.) has been named a U.S. Wind Champion for the 116th Congress by the American Wind Energy Association (AWEA) at an event hosted at Ørsted North America’s office in Boston. AWEA presents U.S. Wind Champion Awards to Members of Congress with exceptional records of support for the American wind industry and have demonstrated clean energy leadership.
Senator Markey has been a long-time champion of offshore wind. Since 2011, Senator Markey has introduced a tax credit for offshore wind energy.  This year, he introduced the Offshore WIND Act which would create a 30 percent Investment Tax Credit (ITC) to help jumpstart America’s highly promising offshore wind industry. Over the next ten years, offshore wind has the potential to create more than 36,000 U.S. jobs and presents a $70 billion supply chain opportunity for businesses. The Senator’s voice supporting clear and consistent permitting processes for offshore wind projects inspires confidence in developers and lights the path towards more low-carbon energy to help combat climate change.

“From the winds of the Plains to the nor’easters that whip Plymouth, our nation is filled with the potential to harness energy from the wind. Wind energy is a win for American jobs, for American energy security, and for our climate, and AWEA is our great champion in building a clean energy future. I am honored to receive AWEA’s Wind Champion Award and pledge my continued commitment to this energy source that will help power our nation in the 21st century,” said Senator Markey.

“Senator Markey has been exactly the type of champion the offshore wind industry has needed. In the U.S. the success of this industry is closely tied to cooperation between the public and private sectors and the Senator embodies that cooperation. We thank him for his leadership and congratulate him for a very well deserved award,” said Thomas Brostrøm, President of Ørsted North America, CEO of Ørsted U.S. Offshore Wind and AWEA Board Member.

“Senator Markey has been a strong and tireless supporter of advancing clean, renewable energy technologies like wind power,” said Tom Kiernan, CEO of AWEA. “The Senator is leading efforts in Washington to launch a new American clean energy industry offshore, one that will employ Massachusetts citizens and catalyze new port infrastructure in the critical effort to address climate change.”