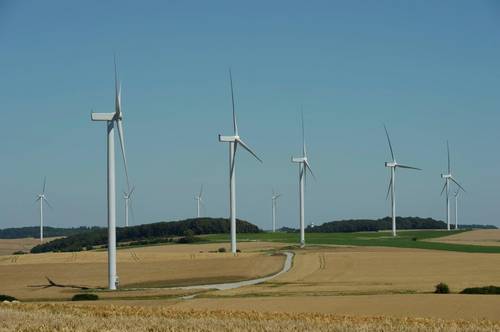 EDF Renewables continues its expansion in France by bringing into service the 22 MW Pays d’Anglure wind farm in the Marne département. This new project forms part of the EDF Group’s Cap 2030 strategy, which between 2015 and 2030 seeks to double EDF’s renewables capacity in France and worldwide, taking it to 50 GW net.

In the heart of the Marne region, this new wind farm boasts 6 wind turbines and straddles the communes of Allemanche-Launay-et-Soyer and La Chapelle-Lasson. The low carbon electricity produced will be equivalent to annual demand from 26,000 people, i.e. nearly 5% of the population of the Marne, and such for the upcoming 20 years and more.

The implementation and sizing of wind turbines have been defined following technical, environmental and landscape studies, in order to optimize the integration of the farm into its environment and promote biodiversity. Some fifty people were employed on site over a 12-month period.

Nicolas Couderc, Executive Vice-President France, EDF Renewables, said: “The Pays d’Anglure wind farm is an addition to our 1.9 GW gross wind energy and solar installed capacity in France. EDF Renewables is a major player in the country’s energy transition, and we are proud to contribute to the ambitious objectives being currently defined by the Multiannual Energy Program [PPE].”