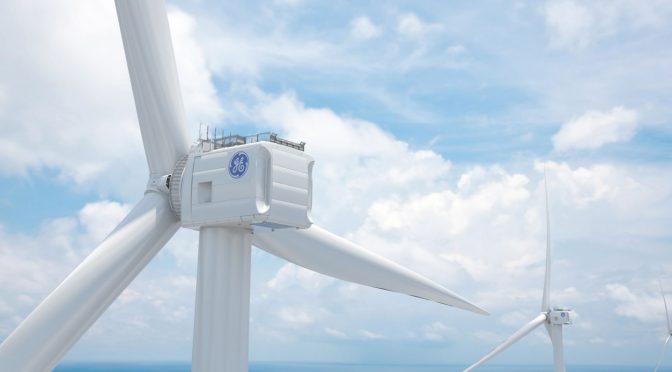 Under the new deal, GE Renewable Energy will supply Dogger Bank with its next generation of offshore technology, the ground-breaking Haliade-X turbine, bringing the world’s most powerful wind turbine to the world’s largest wind farm. The final number of turbines to be installed at Dogger Bank will be confirmed in due course.

Dogger Bank Wind Farms is a 50:50 joint venture (JV) between Equinor and SSE Renewables. The overall wind farm comprises three 1.2 GW projects located in the North Sea, approximately 130km from the UK’s Yorkshire Coast. The projects were recently successful in the latest Contracts for Difference (CfDs) Allocation Round, the UK Government’s auction for renewable power.

SSE Renewables will lead the development and construction phases of Dogger Bank and Equinor will lead on operations once completed.

Paul Cooley, Director of Capital Projects at SSE Renewables, said: “The joint Equinor and SSE Renewables project team on Dogger Bank is excited to work with GE Renewable Energy to introduce the next generation of offshore wind turbine to the UK, and to be the first European wind farm to install and operate these innovative turbines. Dogger Bank will now be home to the largest offshore wind turbines in the world and to this pioneering low carbon technology, which will play a central role in helping the UK become carbon neutral by 2050.”

Dogger Bank Wind Farms Project Director, Bjørn Ivar Bergemo, said: “Our success in the CfD auction was due in large part to the relationships we have built with our supply chain, which enabled the lowest ever strike prices. The Haliade-X represents a step change in turbine technology, and we look forward to working with GE Renewable Energy to maximise innovation and supply chain benefits for the UK.”

The Dogger Bank projects will have a combined capacity of up to 3.6 GW, making it the largest wind farm in the world. It will be able to provide enough clean, low-carbon energy to power over 4.5 million homes annually, equivalent to around 5% of the UK’s estimated electricity generation.

The projects are expected to trigger approximately £9bn of capital investment between 2020 and 2026 into much needed low carbon infrastructure and delivering substantial economic benefits to the UK.

John Lavelle, President and CEO, Offshore Wind, GE Renewable Energy, said: “We are very excited to announce this agreement as it gives us the opportunity to bring the world’s most powerful offshore wind turbine to the world’s largest offshore wind market. We have an important role to play in the UK’s offshore wind ambitions and in delivering further carbon emission reductions. Our Haliade-X technology is helping our customers to make offshore wind a more competitive source of clean and renewable energy by reducing the levelized cost of energy (LCOE).”

The Dogger Bank projects will now progress towards a financial investment decision by the end of 2020, after which there will be confirmation of GE Renewable Energy as turbine supplier.

Onshore construction is expected to commence in early 2020, and first energy generation is expected in 2023. Dogger Bank Wind Farms is currently preparing for the commencement of onshore works, alongside plans to hold events for local residents and the potential supply chain.

SE Renewables is the leading renewable energy company across the UK and Ireland, with a portfolio of around 4GW of onshore wind, offshore wind and hydro. Part of the FTSE-listed SSE plc, its strategy is to drive the transition to a zero-carbon future through the world class development, construction and operation of renewable energy assets.

SSE Renewables owns nearly 2GW of onshore wind capacity with over 1GW under development. Its 1,450MW hydro portfolio includes 300MW of pumped storage and 750MW of flexible hydro. Its offshore wind portfolio consists of 580MW across three offshore sites, two of which it operates on behalf of its joint venture partners. SSE Renewables has the largest offshore wind development pipeline in the UK and Ireland at over 7GW.

Equinor?is developing as a broad energy company, building a material position in renewable energy. Equinor now powers more than?one?million European homes with renewable offshore wind from four offshore wind farms in the United Kingdom and Germany. Equinor is building material offshore wind clusters in the UK, the US North East and in the Baltics. The company commissioned the world’s first floating offshore wind farm in 2017 off the coast of Scotland and is positioned for future floating wind options in several geographies, including UK, Norway and Asia.