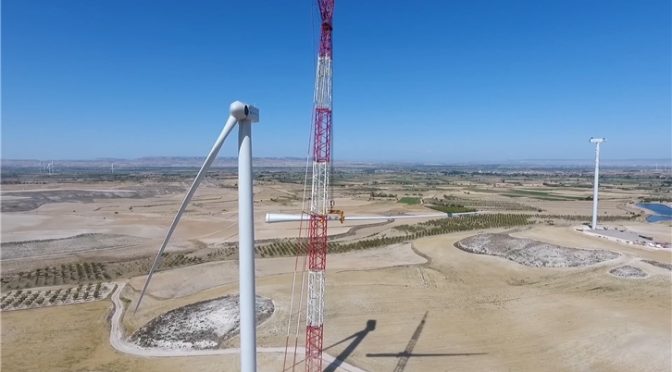 Advances in a wind power project, with an installed capacity of 23 MW, which will be operational before the end of the year. Iberdrola advances in the construction of the El Pradillo wind farm (23 MW), in which the installation of the first wind turbines in the park has just begun, located between the Zaragoza municipalities of Frescano, Borja and Agón, in Aragón.

Wind turbine installation will be completed in the next two months. The wind farm is made up of a total of 6 Siemens Gamesa G132 wind turbines, with 3.4 MW of unit power and 1 wind turbine model SG114, with 2.1 MW.

The components of the wind turbines – torres, shovels, nacelles / hubs, generators, multiplier and traffos – have been manufactured in Spain, at facilities in Zaragoza, Navarra, Gijón, Soria, Cantabria and Burgos.

The project, promoted together with Caja Rural de Navarra, represents an investment of 26 million euros and is scheduled for operation before the end of 2019.

With the production generated by El Pradillo, a population equivalent to 10,500 homes / year will be supplied with clean energy and the emission of 17,300 tons of CO2 / year will be avoided.

More investments to lead the energy transition in Spain

With El Pradillo, Iberdrola reinforces its commitment to renewable energy in Aragon, a region where it operates more than 320 MW of wind and water.

The Pradillo is part of the clean energy relaunching plan designed by Iberdrola in Spain, with which the company plans to install 3,000 new renewable MW by 2022 and up to 10,000 new MW by 2030. The plan will allow job creation for 20,000 people in Spain.

Iberdrola is the first wind energy producer in Spain, with an installed capacity of 5,770 megawatts (MW), while its total installed renewable capacity reaches 15,828 MW.

In the world, Iberdrola’s installed renewable capacity rises to 30,362 MW, a volume that makes its generation park one of the cleanest in the energy sector.