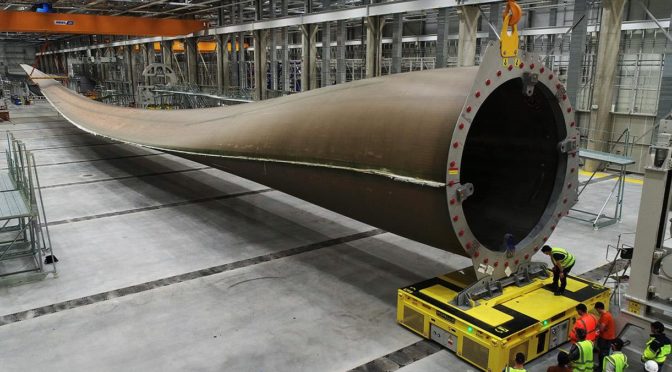 U.S. Senator John Boozman (R-AR), member of the Senate Committee on Environment and Public Works, visited the LM Wind Power Little Rock plant on Wednesday to watch production of the giant turbine blades that drive wind farms throughout the region. The plant is an example of the good manufacturing jobs that wind power is bringing to Arkansas.

The LM Wind Power Little Rock Plant was built in 2008 as its second manufacturing facility in North America. The plant employs more than 500 people who produce blades for wind turbines for use in Texas, Oklahoma and Kansas. LM Wind Power is a GE Renewable Energy business with nearly 14,000 employees worldwide. Twenty percent of all turbines in use today were built by LM Wind Power.

“Wind power is a crucial component of an all-of-the-above energy strategy and supports Arkansas jobs,” said Senator Boozman, “Our national energy strategy must include developing and expanding renewable sources of energy in order to address our current and future needs. We continue to make advancements in these areas and I support smart, responsible approaches that broaden our capability to harness these resources to create new forms of sustainable energy.”

Senator Boozman met with LM Wind Power employees, took a tour of the manufacturing floor and was briefed on the plant’s operations including a preview of the next generation of more powerful and more efficient turbines.

“We greatly appreciate Senator Boozman and his staff taking the time to tour our Little Rock facility, meet with our employees and get to see up close the work we do to power a clean, 21st century economy,” Said Jackie Highsmith, LM Wind Plant Director.

This August 11-17 marks the third annual American Wind Week, a national celebration of U.S. leadership in wind energy production that started in 2017 when wind became the country’s largest source of renewable electricity generating capacity. During Wind Week, the American Wind Energy Association (AWEA) and supporters of wind energy highlight the many ways that wind powers opportunity at dozens of events across the country and online with #AmericanWindWeek.

“For this year’s American Wind Week, there’s a record amount of U.S. wind energy under construction and the 114,000 Americans in our industry are working hard to make the energy you use cheaper and cleaner,” said AWEA CEO Tom Kiernan. “As an all-American energy source, wind is a leading contributor to domestic energy production, economic opportunity, and the fight to minimize climate change.”

“Wind Powers Opportunity” is the theme of this year’s American Wind Week, in recognition of the many economic and environmental benefits that come along with expanded U.S. wind energy production. Today, a record 114,000 Americans work in wind, including many careers at the more than 500 U.S. factories that supply wind farms. America’s veterans find wind jobs at a rate 67% higher than the average industry because they have the skills and dedication to keep wind farms running rain or shine.  Rural communities and family farms that host wind energy projects benefit from well-paying local careers and over $1 billion a year paid toward state and local taxes and annual landowner lease payments.  Click here for specific STATE Wind Energy Facts