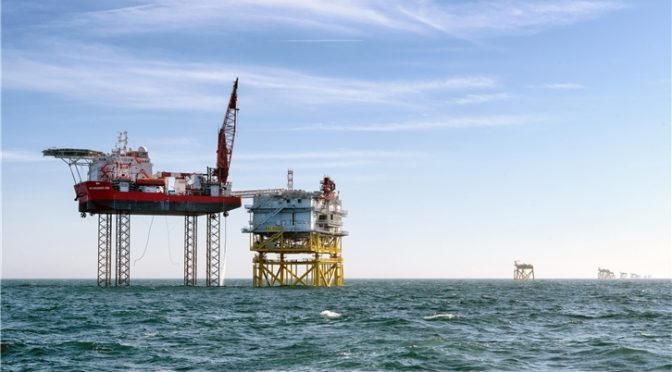 The group will continue to be the majority shareholder, with 60% of this offshore wind farm, which will be one of the largest in the world when it enters into operation.

The company is reaffirming its ambition to lead the offshore wind energy market with a pipeline set to deliver over 10,000 MW in the coming years.
When the wind farm is operational in 2020, the transaction will see Iberdrola receive £1,63 billion, which will be used to fund the organic growth plans referred to in the 2018-2022 Strategic Plan.
Iberdrola has entered into an agreement with Green Investment Group (GIG), part of the Macquarie group, to sell a 40% share in East Anglia One (EAO), the offshore wind project that the company is building in the British North Sea. This will bring a new shareholder into the project, of which Iberdrola will maintain a 60% majority shareholding.

According to transaction terms and conditions the entire value of EAO amounts to £4.1 billion and when the wind farm is operational in 2020, Iberdrola will receive £1.63 billion (about €1.75 billion [1]) for the 40% stake. These funds will be allocated to the Group’s organic growth plans referred to in the 2018-2022 Strategic Plan.

The completion of the transaction is subject to the standard authorisation from the Crown Estate.

EAO is the largest renewable project ever undertaken by a Spanish company. Once commissioned in 2020, it will be one of the world’s largest wind farms, with an installed capacity of 714 MW, supplying 600,000 British homes with clean energy.

Over the next few years offshore wind energy will be an investment focus for Iberdrola, developing a project portfolio of over 10,000 MW. This growth focuses on three main areas: the North Sea, the Baltic Sea and the United States.

Clean power generated by offshore wind farms is a cornerstone of the company’s strategy, which expects to allocate 39% of the €34 billion earmarked for the 2018-2022 period to renewable energy: €13.26 billion.

The group is currently operating two offshore wind farms: West of Duddon Sands, which went into service in the North Sea in 2014, and Wikinger, in the German waters of the Baltic Sea, which has been operational since December 2017.

Iberdrola is in the process of building the biggest offshore wind farm in the United States: Vineyard Wind. Just off the coast of Massachusetts, it will produce 800 MW of power to cover the energy needs of a million homes.

In Germany, in April, the company was awarded contracts to build two new plants in the Baltic Sea, which will produce a total of 486 MW: Baltic Eagle and Wikinger Süd.

In addition to these new plants, the Sant Brieuc wind farm, which is located in French waters, is scheduled to be commissioned in 2022. It will have 496 MW of installed power and will be located just off the coast of French Brittany, 20 kilometres offshore.

Once these projects are operating in late 2022, the company will have installed 2,000 MW of offshore wind power, after which it will add a further 1,000 MW.

Iberdrola is committed to growing its renewable energy business. Globally countries have ambitious objectives for new wind generation facilities. The UK is seeking to develop 30,000 MW of offshore wind, and the United States is developing 25,000 MW.