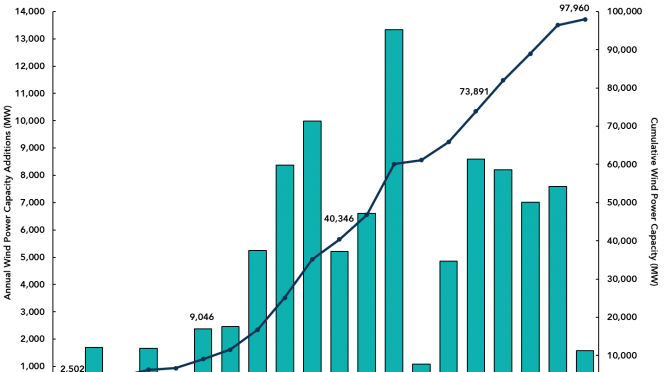 America celebrates wind energy leadership at farms, factories, and ports across the nation.

This August 11-17 marks the third annual American Wind Week, a national celebration of U.S. leadership in wind energy production that started in 2017 when wind became the country’s largest source of renewable electricity generating capacity. During Wind Week, the American Wind Energy Association (AWEA) and supporters of wind energy highlight the many ways that wind powers opportunity at dozens of events across the country and online with #AmericanWindWeek.

“Wind Powers Opportunity” is the theme of this year’s American Wind Week, in recognition of the many economic and environmental benefits that come along with expanded U.S. wind energy production. Today, a record 114,000 Americans work in wind, including many careers at the more than 500 U.S. factories that supply wind farms. America’s veterans find wind jobs at a rate 67% higher than the average industry because they have the skills and dedication to keep wind farms running rain or shine.  Rural communities and family farms that host wind energy projects benefit from well-paying local careers and over $1 billion a year paid toward state and local taxes and annual landowner lease payments.

“For this year’s American Wind Week, there’s a record amount of U.S. wind energy under construction and the 114,000 Americans in our industry are working hard to make the energy you use cheaper and cleaner,” said AWEA CEO Tom Kiernan. “As an all-American energy source, wind is a leading contributor to domestic energy production, economic opportunity, and the fight to minimize climate change.”

Major businesses like Amazon, General Motors, Google, Home Depot, Walmart, and many others are buying rural America’s valuable wind energy cash-crop to power their operations because wind is low-cost, reliable and clean. It’s increasingly likely that a product you use or a store you visit, whether it’s your Starbucks coffee run, supplies at Target, or a cold Budweiser, is powered at least in part by wind. In addition to providing cheap electricity, wind power is one of the fastest, most cost-effective ways to cut carbon emissions as well as air pollution that triggers asthma attacks and creates smog, avoiding $9.4 billion in public health costs in 2018 alone.

Wind power’s contributions to clean air and stronger economy are on track to grow substantially with a record amount of wind power under construction and development in the U.S. At the same time, communities on the East Coast, West Coast, and around the Great Lakes are preparing to harness world-class U.S. offshore wind resources at scale. Building a U.S. offshore wind industry will reliably deliver large amounts of clean energy to America’s biggest population centers, grow tens of thousands of well-paying American jobs, revitalize ports and coastal infrastructure, and create a nearly $70 billion U.S. supply chain.

“Wind power is leading the transformation to a cleaner, stronger U.S. economy,” said Rob Caldwell, AWEA Board Chair and President of Duke Energy Renewables. “Businesses in the wind industry power opportunity for workers, rural communities, and factory towns across America. This American Wind Week, we encourage clean energy supporters in all 50 states to speak with one voice and tell your friends, family and neighbors why you’re proud of U.S. leadership in wind energy production.”

Anyone can participate in American Wind Week by posting on social media in support of wind energy from August 11 to 17 using #AmericanWindWeek. Each weekday from August 12th through the 16th, AWEA will blog and share highlights from events happening around the country themed after five unique ways that wind powers opportunity for Americans. To kick off American Wind Week, a full-sized wind turbine blade will take center stage at the Iowa State Fair where the 2020 presidential candidates and Iowa’s elected leaders will be stumping. Anyone can stop by to sign the blade and speak with wind industry workers.

Information about American Wind Week events, some of which are open to the public, can be found on an interactive map at AmericanWindWeek.org along with infographics and sample social media posts.