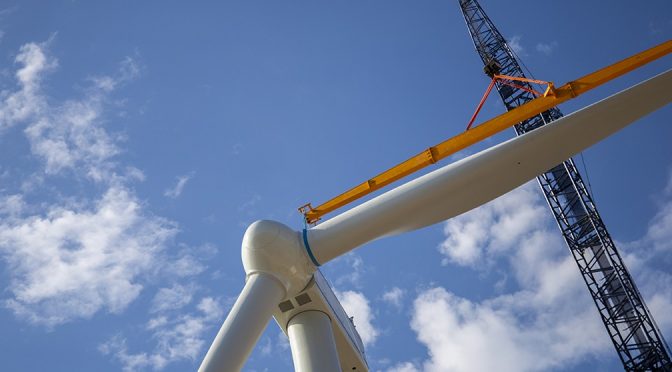 Endesa, through its renewable energy subsidiary Enel Green Power España (EGPE), has begun construction of the Los Arcos wind energy plant, with 34.6 megawatts (MW) of power, in Malaga, specifically among the municipalities of Almargen, Teba and Campillos. The construction of this wind farm will involve an investment of 35.5 million euros and will be operational in the last quarter of the year.

“Endesa is making a very important investment effort in renewable energies to lead the energy transition,” said Endesa CEO José Bogas. “At the end of the year, around 900 MW of renewable energy that the company won in the 2017 auctions will be operational, demonstrating the company’s commitment for Spain to achieve its green energy objectives.”

The Los Arcos wind farm will be operational at the end of 2019, and, when it is operational, it will have the capacity to generate more than 100 GWh per year, which will prevent the annual emission into the atmosphere of approximately 69,000 tons of CO2. It will be equipped with 10 wind turbines of 3.5 MW of unit power.

Enel Green Power Spain has 12 wind farms in Andalusia: 5 in the province of Cádiz (four in Tarifa and one in Vejer), another 5 in Malaga (two in Campillos, one between Campillos and Teba, one in Almargen and one in Sierra of Yeguas), one in Enix (Almería) and one in Padul (Granada).

The Andalusian park is part of the 540 MW of wind power that EGPE was awarded in the renewable energy auctions organized by the Government in May 2017. In addition to Andalusia, the wind farms will be located in Aragón, Castilla y León, Castilla La Mancha and Galicia. When they become operational, the new facilities will generate a total of about 1,750 GWh per year.

For the construction of these parks, EGPE employs various innovative tools and techniques, such as drones for surveying, intelligent tracking of turbine components, advanced digital platforms and software solutions to remotely monitor and support activities and commissioning. in progress of the plant. These solutions allow faster, more accurate and reliable data collection in the work activities, which increases the overall quality of the construction and facilitates communication between the equipment that is inside and outside the work area.

The construction is based on the “Sustainable Construction Site” model of Enel Green Power, including the installation of photovoltaic solar panels at each site to cover part of its energy needs. In addition, water saving measures will be carried out by installing water tanks and rainwater collection systems; Once the construction works are finished, both the photovoltaic panels and the water saving equipment will be donated to the municipalities where the projects are located for public use.

During construction, the plant will employ more than 100 people. To promote the creation of these jobs among local people in the environment, EGPE will carry out training activities on operation and maintenance of wind and photovoltaic plants from September. In addition, EGPE will offer information to citizens about the social actions that accompany the construction of plants, and will make available contact information for possible consultations.

In auctions organized by the Government in 2017, EGPE was also awarded 339 MW of solar energy in Extremadura and Murcia. The construction of wind (540 MW) and solar (339 MW) will involve an investment of more than 800 million euros until 2020. This capacity of 879 MW will increase Endesa’s renewable energy park by 52.4%.

Endesa currently manages more than 6,553 MW of renewable capacity in Spain. Of this figure, 4,710 MW are of conventional hydraulic generation. The rest, more than 1,843 MW, are managed through EGPE, and come from wind power (1,750 MW), mini hydro (54 MW) and other renewable energy sources (14 MW).

Enel Green Power, the global renewable energy business line of the Enel Group, to which Endesa belongs, is dedicated to the development and operation of renewables worldwide, with a presence in Europe, America, Asia, Africa and Oceania. Enel Green Power is a global leader in the green energy sector with a managed capacity of about 43 GW in a generation combination that includes wind, solar, geothermal and hydroelectric, and is at the forefront of the integration of innovative technologies in power plants renewable energy.