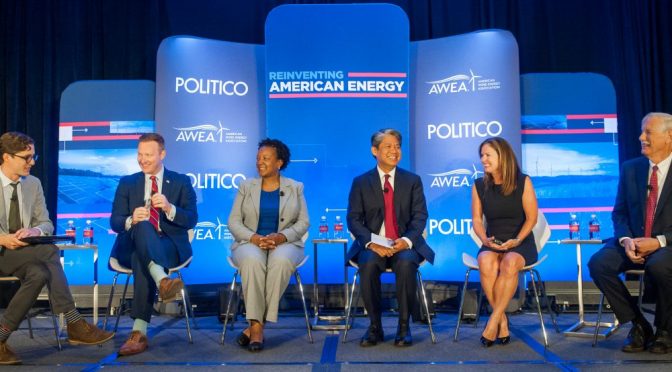 American consumers are calling for abundant renewable sources of energy, advanced batteries, and data-driven “smart” devices to power more of their lives than ever before, from heating and cooling to transportation. AAA reports one out of every five drivers will likely purchase an electric vehicle (EV) as their next family car. Consumer-driven mass electrification is coming fast—utilities, regulators and legislators that comprehensively plan today for EV charging infrastructure, additional renewable energy, and transmission line upgrades will reap long-term benefits for consumers and the U.S. economy.

If you couldn’t attend, a stream of the event is available here and Amy’s full remarks are below.

The American Wind Energy Association is proud to sponsor this event, and we thank Politico for convening such a distinguished panel.

Today’s discussion about accelerating electrification of the U.S. economy and American life is timely as we have reached an important inflection point in the evolution of our nation’s electricity portfolio.

AWEA and its members see wind power playing a critical and leading role in the electricity grid of the 21st century.

With emission free, low-cost electricity available, our country is facing the welcome challenge of finding ways to use more of that energy.

We already benefit from living in an electrified world, advanced batteries and data-driven “smart” devices are changing what’s practical to power with electricity.

Beneficial electrification is improving the efficiency of home and water heating, and even American manufacturing.

And some of the biggest remaining opportunities for electrification are found in the transportation sector.

Electric vehicles provide both consumer and environmental benefits – they are cleaner and more efficient than internal combustion alternatives.

In fact, the Department of Energy found it costs about half as much to drive an electric vehicle, with an “eGallon” costing $1.21 on average.

EVs also emit almost half the CO2 per mile than the average new gasoline car, with potential to become even cleaner over time as renewable energy generation increases on the grid.

This is important because transportation is now the single largest source of U.S. greenhouse gas emissions.

EVs also hold potential to contribute to a more efficient and cost-effective electricity grid of the future by collectively acting as a giant battery.

So, it’s no surprise that consumers are driving the nation toward an increasingly electrified future.

The real challenge is how we get to that future while creating long-term benefits for consumers and the U.S. economy.

Consumer-driven electrification is becoming a mass movement that, if done right, will benefit everybody.

According to a AAA survey, 50 million Americans, or one out of every five drivers, will likely purchase an EV as their next family car.

There will be an estimated 289 EV models available for sale by 2022 – including a growing number of low-cost economy options.

The Department of Energy’s National Renewable Energy Lab estimates that the U.S. will need millions more public charging stations to support the increased number of light-duty EVs estimated to be on the road by 2050.

Other research has shown drivers are more likely to be interested in EVs if they are paired with renewable energy sources, due to the financial savings and environmental benefits they create together.

With a rapidly growing number of EVs plugging into our electricity grid, we’re going to need A LOT of new renewable power to meet consumer demand.

The Electric Power Research Institute estimates that efficient electrification could grow cumulative electricity load in the U.S. 52 percent by 2050 relative to 2015.

Renewable energy technologies, including wind, are ready to meet that challenge, thanks to innovation and U.S. manufacturing expertise.

In many ways, wind power is ideally suited to meet demand from electrification.

Onshore wind generation tends to be strongest at night, exactly when most EV drivers charge their vehicles.

And as I mentioned earlier, wind is a low-cost source of new electricity capacity, which means investments in electrification, fueled by wind power, can result in substantial long-term savings for consumers.

However, just adding more electric vehicles and renewable power isn’t enough to bring about these benefits.

The aging U.S. power grid was recently graded an unacceptable “D+” by the American Society of Civil Engineers.

70 percent of U.S. transmission lines are 25 years or older. Some are more than 100 years old.

We are asking more than ever from our outdated system.

The Energy Policy Act of 2005 recognized the need for transmission build out, granting DOE authority to establish national transmission corridors and providing FERC the backstop siting authority for lines in those corridors.

Implementation of this bifurcated process failed – with zero transmission lines being built and DOE only establishing two corridors.

As a result of this and other regulatory challenges, America’s electric highway has become congested and inefficient – unable to move the best and least expensive energy resources to areas with high demand.

Without better planning today, our national infrastructure won’t be ready for rapid electrification.

Consumers have made it clear this is unacceptable. They want the electricity grid to support both EVs and renewable energy.

So, we’re going to have to walk and chew gum at the same time.

Fortunately, well-planned investments in transmission, renewable energy and electric vehicle infrastructure can more than pay for themselves.

The smartest way to approach these investments is to develop a comprehensive electrification strategy.

There are substantial cost-saving efficiencies to planning and investing in EV charging stations, the renewable energy projects that will fuel them, and the power lines to connect them – all at the same time.

Electric utilities are well positioned to design and manage an electrification strategy because they already play a central role in managing the grid and delivering electricity to consumers.

However, the Smart Electric Power Alliance reported in 2018 that 75 percent of electricity providers are still in what SEPA defines an “early” stage of planning for transportation electrification.

As little as 3 percent of electricity providers were reported to be in late stages of planning – meaning they had developed long-term, strategic transportation electrification goals and designed a deployment program aligned with applicable policies.

Utilities that are still in the early stages of planning can look to the Transportation Electrification Accords for guidance.

The Accords outline how electrification can be advanced in a manner that benefits all utility customers and users of all forms of transportation, while supporting the evolution of a cleaner grid and stimulating innovation and competition for U.S. companies.

By following these principles – which have been signed onto by AWEA, Fortune 500 companies, including automakers and electric utilities, consumer advocates, labor groups, and others – electrification programs are more likely to succeed and deliver consumer benefits.

And utilities aren’t the only ones who should be planning today for mass electrification.

There are important roles for the federal government, RTOs, states, and cities to play in supporting consumer-driven electrification.

State Public Utility Commissions should consider all the economic and environmental impacts, as well as improved grid efficiency, when ordering, reviewing, or approving electric utility investments in electrification infrastructure.

And in many places, state legislatures can greatly facilitate and accelerate those commission orders.

Wind is ready to play our part in electrification, and AWEA is here to help as a partner for utilities, legislators, and regulators navigating this transition.

On your seats you’ll find an executive summary of a recent AWEA report, A Shared Future: Electrification and Renewable Energy, aimed at helping prepare electricity providers and state officials to meet evolving consumer expectations for electrification in a cost-effective and responsible manner.

The report is paired with example state legislation drafted with the intent of enabling each state to tailor its legislation according to its own needs and circumstances.

We hope you will find these resources informative and will contact AWEA staff with questions.

With that, I’m honored to convene such a distinguished group of speakers here today to further discuss this important topic.

The Electrification Revolution event was part two in Politico’s Reinventing American Energy series, sponsored by the American Wind Energy Association (AWEA). A recording of part one, focused on the importance of upgrading and expanding U.S. transmission infrastructure, is also available.