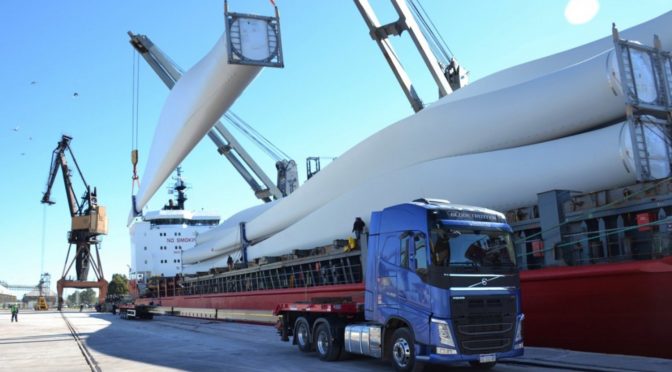 Despite the durability of other terminals, the port of Bahía Blanca will allow you to take advantage of the opportunities that arise in the development of wind energy in the country.

In less than two years, for example, a total of 74 more units are available, according to the contributions of the Port Management Consortium.
There are 12 wind turbines for China Envision, 11 for General Electric and in Tornquist 27 for Mataco wind farm and 24 for San Jorge.
This shows that estimates released years ago were not excessive when it was projected that about 1,000 wind turbines in the country, about 500 would be channeled through Bahia.

Even forecasts predicting the arrival of 40 vessels between 2017 and 2020 will also be met.
Two main sites

Since the beginning of the process, all the teams were mobilized by the Multipropósito docks of Patagonia Norte, Ingeniero White, and site 5 of Galván.

Regarding the land transport of wind turbines, the logistics were mainly carried out by transport companies Loginter and Crexell.

In 2017, thanks to multimillion-dollar investments attracted by new legislation on renewable energies, ships with the different components of wind turbines began arriving at the local port.
The first two arrived at the port on October 23, 2017.

From there, in just eight months, another eight vessels with parts of wind turbines arrived in our city, throwing a total of ten vessels in 283 days, that is one every 28, an achievement for the local port terminal, chosen over other competitors of the country.
Towards other provinces

In August of last year there was a fact no less relevant because after the mooring of nine vessels with wind turbines destined for the region, there was the arrival of a ship with components for a wind farm located outside the province of Buenos Aires , more precisely in General Acha, La Pampa.

This tendency to receive equipment for a hinterland that reached other provinces increased over time, reaching, for example, Neuquén, and today is a source of pride for the port authorities.

2087/5000In order to channel this traffic and compete successfully with other docks, the local port had to undertake a process of adaptation, not only of its operations, but also of its facilities, which it completed in a quick and accurate manner.
More infrastructure

In this sense, the equipment is unloaded in two different areas of the port: the free sub-area of ??Puerto Galván – the first in the country and managed and built on 5 hectares based on the needs generated by wind turbine logistics – and on a multi-purpose pier beach at Ingeniero White harbor.

To this must be added the logistics beach developed on almost 13 hectares located in Loma Paraguaya, in the vicinity of the refinery operated by the Trafigura group.
Heavy equipment

The logistical challenge consisted of adapting the existing infrastructure to mobilize large-scale equipment on roads and routes.

For example, it should be borne in mind that in a wind turbine there are 4 main components: the blades (between 65 and 75 meters in length), the towers (up to 120 meters in 3 or 4 sections), the generator and a hud (bolt that subject and weighing more than 4 tons).
Added to this is the fact that these teams require all special logistics and specific customs aspects.
A rate reduction that also influenced

Another of the measures that surely contributed to position Bahia as the leading port in the wind turbine traffic was the rate reduction implemented as of November 1, 2018.

A 15% decrease in the Load Rate was applied for certain import traffic related to loads corresponding to renewable energies, inputs for the development of Vaca Muerta and containerized cargo.

In 2016, a rate bonus was introduced for certain concepts that represented, on average, a 20% reduction, which is still in force.

Renewable energy loads and those related to Vaca Muerta have been major players in local port operations.