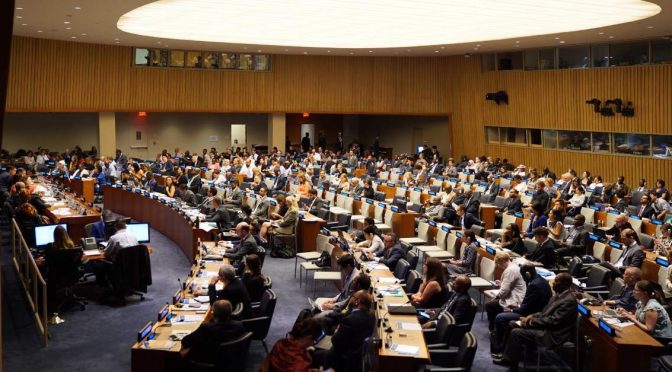 ‘There can be no sustainable development without renewables’ – that was the takeaway from the 17th IRENA Council which concluded recently in Abu Dhabi. It was a message the Agency’s Director-General Francesco La Camera reinforced at every opportunity and a message that will once again take centre-stage during the United Nations High-Level Political Forum (HLPF) on Sustainable Development in New York this and next week.

The UN High-Level Political Forum takes place at the UN Headquarters in New York from 09–18 July 2019. Progress on six of the seventeen Sustainable Development Goals (SDGs) will be reviewed. Renewable energy plays a prominent role in goals being discussed this year, particularly those promoting sustained, inclusive and sustainable economic growth (SDG8); taking urgent action to combat climate change and its impacts (SDG13); and promoting peaceful and inclusive societies for sustainable development (SDG16).

Director-General Francesco La Camera will attend the Forum to engage dignitaries and IRENA members and partners. Mr. La Camera will also participate in a series of high-level discussions on topics including scaling-up climate action through the energy transformation and accelerating the energy transition in small island developing states.

Mr. La Camera will highlight the inter-linkages between the goals under review and access to affordable, reliable and modern energy for all (SDG7), a focus of  the last year’s HLPF. The essential role of renewable energy in powering growth, empowering people, and taking climate action will also be emphasised.

On 16 July, IRENA’s High-level side event on ‘Scaling up climate action through clean energy transitions: Delivering on the Paris Agreement and the SDGs’ will be co-convened by UN DESA, the European Union, and the Permanent Mission to the UN of the Federal Democratic Republic of Ethiopia. Building on findings and outcomes from reports and meetings, including the 2019 Tracking SDG7 Energy Progress Report and Climate Summit preparatory meeting in Abu Dhabi, outcomes from this discussion will feed into the UN Secretary-General’s Climate Action Summit and the SDG Summit in September 2019.

On 17 July, the High-level Side event on Scaling-Up Energy Transition in Small Island Developing States, will mark the launch of the policy brief on ‘Achieving SDG 7 in Small Island Developing States’ and pave the way for the Mid-term Review of the SAMOA Pathway taking place in September 2019. Organised by Saint Lucia, Samoa, Maldives, UN-OHRLLS and IRENA, the event will take stock of energy transition developments and renewable energy uptake in SIDS and explore the vital elements in making progress in the area of sustainable energy.