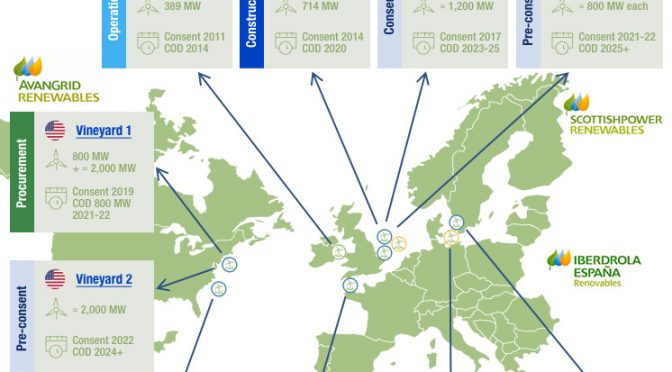 According to the review of Strategic Perspectives 2018-2022, launched in February, in London, renewables are still among the group’s mainstays, with 39% of a total €34,000 million investment will be allocated to this business area. Within renewables, the company is investing heavily in offshore wind energy generation.

The Iberdrola group currently has two offshore wind farms up and running — West of Duddon Sands and Wikinger — and ranks among the top developers of this type of technology in terms of the number of projects it has in the pipeline to produce more than 12,000 MW. These future developments will be located in the USA, the UK and Europe.

Projects in the USA will be implemented via the Avangrid(*) subsidiary, where the group already has offshore wind farms under construction to produce up to 7,300 MW. The company is in the process of building the biggest offshore wind farm, known as Vineyard Wind, just off the coast of Massachusetts, which will produce 800 MW of power to supply the energy needs of a million homes. Looking ahead to 2027, this Iberdrola subsidiary is looking into a further three major offshore wind farm projects: an additional 2,000 MW in phase one of Vineyard Wind, a further 2,000 MW in phase two of Vineyard Wind, and roughly 2,500 MW more in Kitty Hawk (North Carolina).

In the United Kingdom, Iberdrola’s ScottishPower subsidiary is busy with construction work on East Anglia One, another of its major offshore wind farm projects. With a planned capacity of 714 MW, the finished facility will be the biggest offshore wind farm in the world, covering an area of 300 km2. But East Anglia ONE is actually part of a much more ambitious project: Iberdrola has asked the British Government for permission to extend these facilities and has submitted a plan to the United Kingdom Authorities for East Anglia TWO (257 km2 / 800 MW capacity) and THREE (305 km2 / 1,200 MW capacity).

Here in Europe, the Iberdrola Group has obtained contracts for two new wind farms in the Baltic Sea: Baltic Eagle and Wikinger Süd, with a joint capacity of 486 MW. Added to these facilities is the Saint Brieuc wind farm in the bay it is named after, in the region of Brittany. The farm is expected to be up and running some time in 2023, with a total installed power of 496 MW.