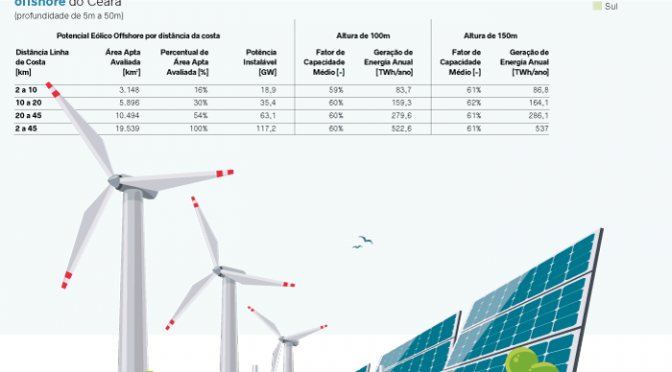 Study points to wind power potential in the Ceará sea
Installation of wind turbines at sea (offshore) and has the potential of generation in Ceará. According to a new survey, the state will have greater area for the production of renewable energy.
Old demand from the energy sector of Ceará is one of the main bottlenecks for attracting investments, the updating of the wind energy and solar atlas is in the final phase of completion and is expected to be launched by the first half of July. However, the main points of the study, which indicates the areas with the greatest potential for wind farm generation, were presented during the Brazil Windpower congress, the largest wind energy event in Latin America, held in São Paulo from May 28.

Among the main innovations brought by the new state wind and solar atlas, which had been awaited for more than a decade, are studies on offshore wind potential (for seabed parks) and in areas of the interior of the State, use of wind towers up to 150 meters high.

The old Ceará eolic atlas, made in the year 2000, considered towers up to 80 meters, which ended up limiting the installation of plants on the coast, where there are favorable wind conditions even at low altitudes.

According to Jurandir Picanço, president of the Ceará Energy Sector Chamber and energy consultant of the Federation of Industries of the State of Ceará (Fiec), the area with generation potential in the State increases significantly with the use of towers up to 150 meters On the possibility of building offshore plants, Picanço says that the new survey revealed the possibility of wind generation in an area of ??10 thousand square kilometers, where the depth goes up to 20 meters. If you consider the regions with up to 50 meters, the area passes to 19 thousand square kilometers.

“Ceará is privileged not only by the winds, but by its continental shelf that is of low depth,” he points out. Among the advantages of sea power generation are the speed and constancy of the winds at different times of the day, unlike the terrestrial parks.

One of the aspects raised by the atlas, which places Ceará in an advantageous position in relation to other states, is the peak times in wind generation. According to the “study of hourly and monthly variability of the wind resource”, the State presents a generation potential in the schedules of demand superior to that of states like Rio Grande do Norte and Bahia.

“We confirmed that the curve of combined wind generation on the coast and the Ibiapaba Chapada happens at the time of the most valuable energy, which is in the late afternoon and early evening,” says Adão Linhares, Executive Secretary of Energy and Telecommunications of the Secretariat of State Infrastructure (Seinfra). “This is our differential, the energy of Ceará has more value than that of other states, our peak of generation is in the moment of greater demand, while in the neighboring states it occurs more at dawn,” argues Linhares.

The atlas also presents the potential of joint generation of wind and solar energy, facilitating the connection to the transmission lines. According to the document, only the hybrid generation potential represents approximately 50% of the entire national supply of these energy matrices in the year 2017.

“The map also shows the degraded areas of the State, which can not be used by agriculture, but which can be used for solar generation, for example, in the Inhamuns and Jaguaribe regions,” points out Jurandir Picanço. In these regions, besides the high levels of solar radiation, the low price of the land contributes to the viability of projects in the segment.

For Adão Linhares, with the new mapping of the generation potential of the State, an “avenue of opportunities for investors” opens up.

“We are technically showing numbers up to conservatives. We can combine wind generation with solar, and still have offshore with a very close viability to onshore,” says Linhares. “It was a surprise the size of our offshore, and shows that we are prepared to generate power at sea.”

Considered the starting point for investors, the wind and solar atlas should facilitate the attraction of investments to the state, says Eduardo Neves, president of the State Development Agency of Ceará (Adece).

“We will be able to show the investor where there are the best winds, the best conditions of solar radiation. Even the environmental issue will be on the map,” says Neves. The atlas was developed by Adece in partnership with Fiec and Sebrae Ceará.