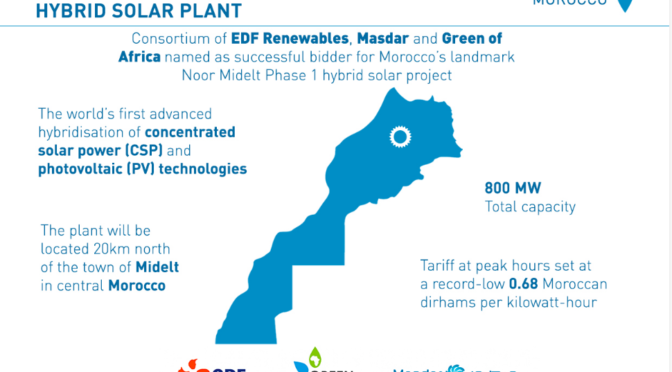 The Moroccan Agency for Sustainable Energy (Masen) said the project, which will have a total installed capacity of 800 MW, is the world’s first advanced hybridisation of concentrated solar power (CSP) and photovoltaic (PV) technologies. 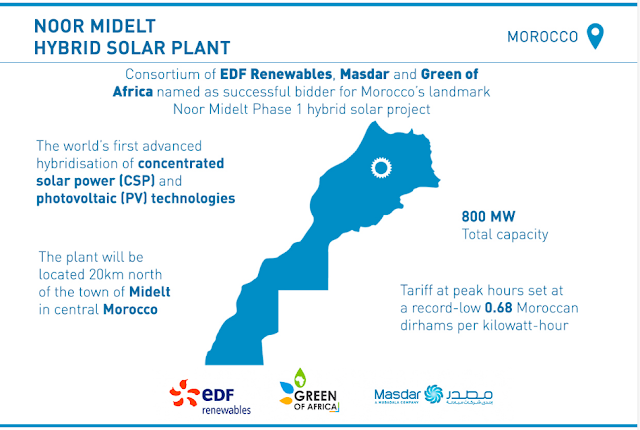 Abu Dhabi Future Energy Company (Masdar) said its consortium comprising EDF Renewables, a world leader in renewable energy electricity and Green of Africa has been awarded the tender for the design, financing, construction, operation and maintenance of the Noor Midelt Phase 1 multi-technologies solar power plant (solar thermal concentrating and photovoltaic).
The 800 MW plant will be located 20 km north of the town of Midelt in central Morocco, in the high plains surrounding the Moulouya River and between the Middle and High Atlas Mountains.
Construction on the project is expected to begin in the last quarter of 2019, while energy will be delivered to the grid in 2022, said a statement from Masdar.
Noor Midelt Phase 1 is the third project that EDF Renewables and Masdar will be working on together. Morocco’s 800 MW CSP-PV Noor Midelt breaks last year’s auction price record of 7.3 cents set by DEWA in the UAE, with winning bid at USD 7 cents/kWh.
EDF Renewables is a partner in Shua’a Energy 2, the joint venture led by Dubai Electricity Water Authority (Dewa) developing the 800-megawatt (MW) third phase of the Mohammed bin Rashid Al Maktoum Solar Park in Dubai, the first 200MW stage of which was inaugurated in April 2018.
The two companies are also partners in the recently announced Dumat Al Jandal wind farm, which at 400MW will be Saudi Arabia’s first and the Middle East and North Africa (Mena) region’s largest wind energy project.
On completion, it will provide dispatchable solar energy during the day and until five hours after sunset for a record-low tariff at peak hours of 0.68 Moroccan dirhams per kilowatt-hour.
On the contract win, Masdar CEO Mohamed Jameel Al Ramahi said: «We are honoured to leverage our global expertise and experience in CSP and PV technologies as part of the consortium chosen to develop the Noor Midelt Phase 1 multi-technologies solar power plant.»
«We applaud Morocco’s bold renewable energy vision and its commitment to the large-scale development of a groundbreaking technology combining solar power with storage, which will achieve new levels of cost and operational efficiency,» remarked Al Jannahi.
«This project marks a key step in the transition of renewable energy from its traditional peak-shaving role in meeting power demand to becoming a baseload electricity provider in the future,» he stated.
«Through a shared commitment to commercialising advanced clean technology with our partners, Masdar is helping to bring another world-first in renewable energy to the Mena region,» Al Ramahi added.
EDF Renewables CEO Bruno Bensasson said the group was proud to be part of a consortium which will significantly contribute to Morocco’s visionary objectives to produce 52 per cent of its electricity from renewable sources by 2030.
«We would like to thank the Moroccan Agency for Sustainable Energy for having designated our consortium as the successful bidder for this innovative project. With our partners, we will develop at Midelt a world first hybrid solar and storage facility,» he noted.
«Our solid long-term relationship with Masdar is strengthened by this third large-scale renewable project. This award has been possible thanks to the combined expertise and achievements of the 3 consortium members: Green Of Africa, Masdar and EDF Renewables,» added Bensasson.
Elsewhere in Morocco, Masdar announced last year that it had helped to equip nearly 20,000 homes with solar panels and household appliances. The Morocco Solar Home Systems (SHS) project led by the Office National de l’Electricité et de l’Eau Potable (ONEE) successfully extended renewable energy access to more than 1,000 villages.
Al Ramahi said Masdar remained committed to Morocco’s long-term energy goals, and the Emirati company expected this project to further raise the profile of renewables as a provider of reliable and cost-effect clean power in the Mena region.
«It is now cheaper to build renewable energy power plants than those based on fossil fuels, and this is increasingly evident in the region,» he added.