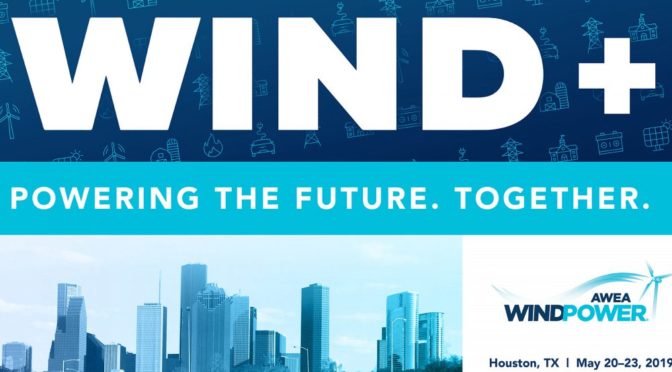 American Wind Energy Association leaders arrived in Houston to elect new Board members amid record US wind farm development.
Leaders from the wind industry and across the clean energy sector arrived in Houston today as the American Wind Energy Association (AWEA) opens WINDPOWER 2019, the largest wind energy conference in the Western Hemisphere. The show features its largest exhibit hall in five years to accommodate the business deals that have driven both U.S. wind power jobs and wind farm development activity to record levels.

WINDPOWER’s return to Houston after a decade highlights the dramatic evolution of wind power from a promising new technology into a mainstay of 21st Century U.S. energy production. Today, the State of Texas by itself has as much wind power generating capacity as the entire United States did in 2008, when WINDPOWER was last held in Houston. The Lone Star State is now home to roughly a quarter of all U.S. wind power capacity and 25,000 wind jobs.

“We’re here in Houston, Energy Capital of the World, to showcase what makes wind power America’s most competitive source of new electricity generation and to set the table for business deals that will keep U.S. energy workers busy for years to come,” said Tom Kiernan, AWEA CEO. “Wind power is leading the transformation to a cleaner, stronger U.S. economy, but no energy technology can go it alone. Our WIND+ theme this year embraces the trend toward multi-technology companies and projects in the utility-scale power sector that pair wind with solar, storage and other clean technologies.”

The theme of this year’s show, WIND+, reflects the growing network of partners and allies working alongside the wind industry to forge a cleaner, stronger U.S. economy. Over the last five years, wind and solar have consistently won big shares of new U.S. power capacity additions. The rapidly falling cost of energy storage, combined with transmission line expansion, will make the whole electricity grid work better and unlock new opportunities to deliver low-cost wind and solar to consumers.

“American consumers, from families to the Fortune 500, are calling for more renewable energy because it’s good for the environment and their bottom lines,” said Rob Caldwell, newly installed AWEA Board Chair and President of Duke Energy Renewables. “In my time as Board Chair, AWEA will strengthen multi-technology partnerships to advocate for market and policy reforms needed to meet consumer demand. The work we’re doing today will position the wind industry and U.S. economy for many years of continued success.”

AWEA leadership gathered on the first day of WINDPOWER to elect new members of the association’s Board of Directors who will oversee work toward these priorities. AWEA’s Board installed a new Chair, Rob Caldwell, President of Duke Energy Renewables, a leading renewable energy and energy storage developer. AWEA’s outgoing Board Chair, Steve Lockard, President and CEO of TPI Composites, now moves to his Past-Chair position as an officer of AWEA.

Ten Directors were also elected to the Board and three were appointed, as follows:

Also appointed to the Board as Advisors were Neha Palmer, Director of Operations and Head of Energy Strategy, Google and Suedeen Kelly, Partner, Jenner & Block LLP.

Tom Kiernan, Rob Caldwell, Steve Lockard, and other leading voices in the WIND+ community will share their vision for the future of the industry when WINDPOWER’s Welcome and Opening General Session kicks off at 11:00 a.m. CT, Tuesday, May 21.