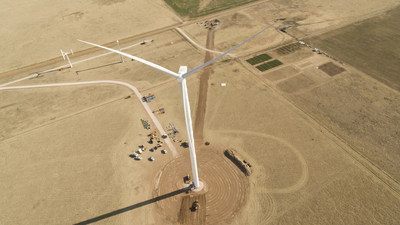 Sam Enfield, Investment Director at MAP Royalty, was recognized last month with a Special Achievement Award at AWEA’s Siting and Environmental Compliance Conference in Albuquerque, New Mexico, in recognition of an unparalleled career in wind development and siting.

AWEA’s Special Achievement Awards are not common occasions. They’re reserved for a select few who have gone above and beyond and demonstrated a strong, consistent commitment to the wind industry.

Enfield has earned special recognition as a fixture of the American wind energy landscape. Over the years, he has made his name as a true champion of the wind industry.

He began his work in renewables in the 1980s, motivated by his concern about climate change. Shortly thereafter in 1992 he began his career developing wind projects. Throughout his career, he was a trailblazer, taking opportunities to work on Texas’ initial renewable portfolio standard in 1999 and developing the first wind farm in West Virginia in 2002.

Ensuring wind energy’s relationship to wildlife is positive is a clear feature of Enfield’s career. He developed the original concept and was a founding member of the Bats and Wind Energy Cooperative in 2003, a group of experts from government, industry, and NGOs working to reduce bat mortality from wind turbines.

He also served five years on the Federal Advisory Committee that developed recommendations that became the U.S. Fish and Wildlife Service Wind Energy Guidelines. These guidelines continue to be the definitive resource for wind developers across the country. The advisory FAC was just one of many siting initiatives he was involved in.

He also served as President of AWEA’s Board of Directors from 2004-2005. His time coincided with the passage of the first multi-year production tax credit (PTC). He also convened an ad hoc group of development professionals that went on to become AWEA’s Siting Committee, which he chaired until 2018.

“I just feel lucky that this industry existed,” Enfield reflected.

Enfield recently announced his retirement. He departs leaving a legacy of important contributions to the industry and project siting community. Certainly, more than a short blog post worth. Without question, he witnessed and took part in a revolutionary transformation of the industry.

“It has been an honor to work alongside Sam for the final decade of his far-ranging and influential career,” said Aaron Zubaty, Managing Partner, MAP® Energy. “Sam showed everyone he ever met that leadership isn’t granted, it is earned. His tireless and principled dedication to the expansion and market acceptance of renewable energy, and to the growth of the wind industry, in particular, has provided his colleagues and friends at MAP® and elsewhere an unforgettable journey. Thank you, Sam, not only for what you have done but how you did it and who you are.”

Join AWEA and the rest of the industry in thanking Sam Enfield for his dedication to wind power.