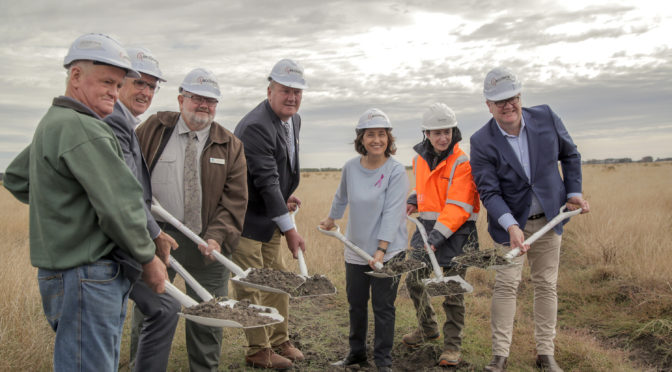 ACCIONA Energía has started construction work on its fifth wind power farm in Australia, 100% owned by the company, with an investment of around AUD 288 million (180 million euros at the current exchange rate). The Mortlake South Wind Farm, located in the State of Victoria, will have a capacity of 157.5 megawatts (MW) and be equipped with Nordex technology 4.5 MW turbines. It will represent a 36% rise in the company’s wind power capacity in Australia, reaching 592 MW. 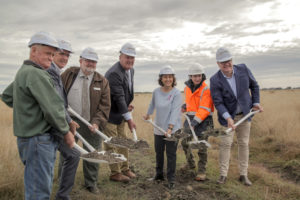 The sod-turning ceremony held today at Mortlake South recognised the start of construction work at the wind farm, which will continue until its entry into service in the second half of 2020. The ceremony was attended by the Hon Lily D’Ambrosio MP, Victoria’s Minister for Energy, Environment and Climate Change. The ACCIONA delegation was headed by Brett Wickham, ACCIONA Energy Australia’s Managing Director.

“This fifth wind farm in Australia shows our long-term commitment in a country whose energy future is increasingly linked to the development of clean and renewable sources – a process to which ACCIONA wants to make a significant contribution,” Mr Wickham said.

Mortlake South will generate clean energy equivalent to the electricity consumption of around 115,000 Australian homes, avoiding the emission of 532,000 tonnes of CO2 to the atmosphere every year from coal-fired power stations. The construction phase will mean the creation of around 100 jobs, plus around 10 in the operational phase.

The Mortlake South wind farm will have 35 4.5 MW Nordex turbines with a rotor diameter of 149 metres and blades of almost 73 metres in length.

It will also have an energy storage installation to improve its performance and facilitate grid integration. This storage capacity is still being evaluated, but will be somewhere between 4-5 MW.

The construction phase will include the laying of a 15-kilometre-long underground power line of 220-kilovolts (kV) as far as the substation at Terang.

Australia is a strategic market for ACCIONA Energía, which has invested over AUD 1,300 million (810 million euros) in the country since it started operations there in 2002.

Acciona Energía is a global operator in renewable energies with 30 years’ experience in the sector and more than 9,600 MW under its ownership in 16 countries, five continents. It owns and operates 222 wind farms, 76 hydro plants, 6 large photovoltaic plants, 3 biomass plants and a Concentrated Solar Power plant. The company markets energy to large clients.