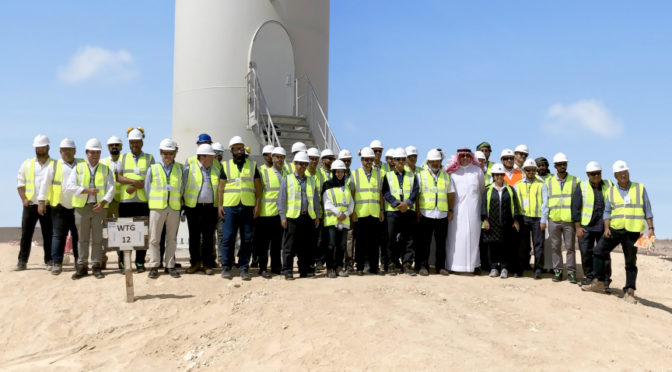 A senior delegation of government and business dignitaries has witnessed the steady progress in the development of the 50-megawatt (MW) Dhofar Wind Farm, the GCC’s first utility-scale wind farm. 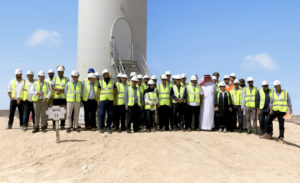 The wind farm, which is fully funded by the Abu Dhabi Fund for Development (ADFD), reflects Oman’s commitment to diversify its energy sources. The project is being implemented by Masdar on behalf of ADFD, through an EPC consortium of GE Renewable Energy and TSK. On completion in the third quarter of this year, the wind farm is expected to generate enough electricity to supply 16,000 homes, equivalent to 7% of the Dhofar Governorate’s total power demand.

Construction began in the first quarter of 2018. Four of the project’s 13 wind turbines have now been installed, and virtually all of the project’s infrastructure has been completed. The remaining wind turbines will be in place by the end of March, before being connected to the grid. Project handover is scheduled for Q3 2019.

Eng Alkyumi said: “Oman is very rich in renewable energy resources and OPWP is determined to exploit the learnings from this project, and its previous IPP experience, to expedite energy generation from such resources.”

OPWP will be the off-taker, or purchaser of the generated power, from the Rural Areas Electricity Company of Oman (Tanweer), which is responsible for operating the wind power plant upon completion.

Speaking on the occasion, HE Mohammed Saif Al Suwaidi, Director General of ADFD, said: “To contribute in achieving the strategic priorities of the Omani government, ADFD is delighted to work alongside world-class stakeholders including Masdar, OPWP, Tanweer, GE and TSK. As the financiers of this strategic project, ADFD is proud of the steady and timely progress of the 50 MW wind farm in Oman.”

Commenting on ADFD’s role in financing socio-economic development projects for more than four decades, HE Al Suwaidi added: “To drive the objectives of the United Nations’ Sustainable Development Goals (SDGs), ADFD has provided about AED2.7 billion in renewable energy projects all over the world. Not only are these projects stimulating economic growth, they are also supporting governments in realizing their national priorities.”

Eng. Saleh Al Rumhi, CEO of Tanweer, said: “Today’s site visit marks an important milestone in the development of the country’s first wind power plant, and Oman’s sustainable energy transition. Supporting the diversification of Oman’s energy mix and economy is our top priority, in line with Oman’s sustainability goals, which aims to generate 10% of its electricity from renewable sources by 2025.”

GE Renewable Energy is providing the project’s 3.8MW wind turbines that are tailor-made for hot and arid desert conditions, while TSK is responsible for the remainder of the wind farm’s infrastructure and electrical transmission facilities connecting the plant to the grid.

Power demand in the Dhofar Governorate, the largest of Oman’s 11 Governorates, is growing at around 10% annually. Besides helping to meet this demand, the Dhofar Wind farm will offset an estimated 110,000 tonnes of carbon dioxide emissions annually, while reducing reliance on natural gas for domestic power generation.