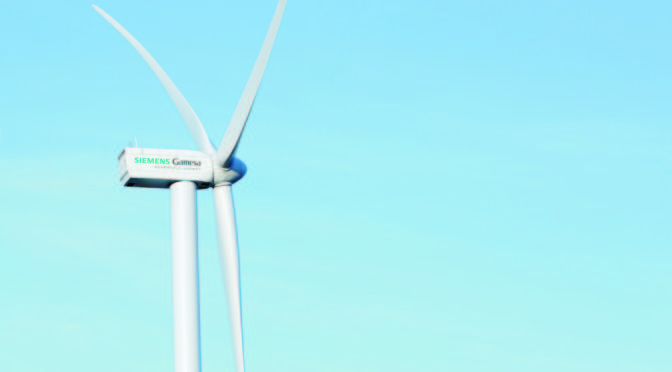 Siemens Gamesa will install 270 units of the SG 2.1-122 wind turbines. The wind power order includes two turnkey wind farm projects which will be developed in the states of Gujarat and Karnataka.
Siemens Gamesa Renewable Energy (SGRE) has secured a new order in India from ReNew Power, India’s largest renewable energy Independent Power Producer (IPP). The scope includes the supply of 270 units of the SG 2.1-122 wind turbines, with a total capacity of 567 MW, to two wind power facilities.

As per the agreement with ReNew, one of the largest announced in India, Siemens Gamesa will provide the infrastructure needed to install and operate both wind power facilities. The company will supply, install and commission 127 SG 2.1-122 wind turbines for the project in Bhuj, Gujarat and 143 SG 2.1-122 wind turbines for the project in Davanagree, Karnataka, respectively. Both projects are expected to be commissioned by the first quarter of 2020.

With over 1 GW of contracted capacity of wind projects for ReNew power, SGRE stands as one of the trusted renewable energy partners for the company in India.

“We are happy to announce this deal with ReNew. It marks a major milestone for Siemens Gamesa in India, with both the size of the project and the technology. Continued large orders from leading IPP’s such as ReNew demonstrates customers’ trust in our capabilities, and encourages us to work on innovative technologies focused on delivering more value for our customers,” said Ramesh Kymal, Onshore CEO of Siemens Gamesa in India.

Commenting on the project, Mr. Balram Mehta, President – Wind from ReNew Power said: “As leaders in the Indian renewable energy industry, we uphold very high standards of quality and performance and select partners who reflect our passion for excellence. In our long-standing partnership since 2012, Siemens Gamesa has proven to be a reliable and competent support for us”.

As per GWEC’s ranking, India ranks 4th in global wind power installed capacity. The onshore potential in the country is promising as it stands at 300 GW of which only 35 GW has been tapped. The government of India has established a target of reaching 65 GW of cumulative wind power capacity by 2022.

Present in India since 2009, the accumulated base installed by Siemens Gamesa recently topped the 5.5 GW mark. The company has two blade factories in Nellore (Andhra Pradesh), and Halol (Gujarat), a nacelle factory in Mamandur (Chennai, Tamil Nadu) and an operations & maintenance centre in Red Hills (Chennai, Tamil Nadu).