In December 2018, the Ombepo Wind Farm went online, generating 5MW to provide electricity to the nearby towns. PENETRON ADMIX was the key crystalline product specified to waterproof and densify the concrete foundations of the three massive wind turbines.
The construction of the Ombepo Wind Farm was set up by InnoSun Energy Holding, a French-Namibian renewable energy company, in collaboration with the harbor city of Lüderitz, in southern Namibia. Construction of the N$180 million (US$13 million) project started in mid-2016; the initial phase of three turbines was completed on time. 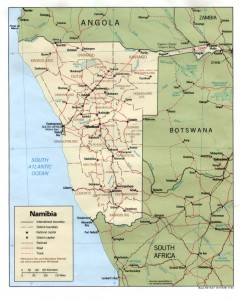 During the inauguration ceremonies last year, Tom Alweendo, Namibia’s Minister of Mines and Energy, stated the country was committed to achieving 70% of renewable energies by 2030, with the Ombepo Wind Farm project representing the beginning of the country’s transition to sustainable energy. Ultimately, four wind farms (with a total of 98 wind turbines) located across the southwestern Namibian coast between Oranjemund and Lüderitz will increase local electricity generating capacity from 400 to 600 megawatts. This boost will provide electricity to all schools and health facilities and increase the region’s rural electrification rate from 34% to 50% by 2020.

“The word ‘ombepo’ means ‘wind’ in Oshiwambo (Ed: a dialect spoken by the Ovambo people in Namibia), and there’s certainly plenty of that out here,” says Clive Leader, Managing Director of Penetron South Africa. “The coast of Namibia is renowned as one of the least hospitable and – for concrete structures – most corrosive coastlines anywhere in Africa, with high levels of sulphates, as well as exposure to extreme and constant desert winds.”

The harsh environment of the Namibian coastline made durability of the planned concrete foundations for each of the three massive wind turbines a concern. Each turbine stands 80 m (over 260-feet) tall, with three gigantic blades and single generators. In addition, the isolated location and limited availability of good concrete materials proved a major challenge for the project.

“This is where the Penetron products and our technical teams began to play a key role in Phase 1 of the Ombepo Wind Farm project,” adds Clive Leader. “After extensive durability testing and a number of concrete mix designs, PENETRON ADMIX was specified to densify and waterproof the concrete foundations. The crystalline admixture will now effectively block any deterioration of the concrete matrix – through carbonation, sulphate attack, and ASR characteristic for the area – for the life of the structure.”

To achieve concrete durability, especially in critical environments, properties such as low permeability, low shrinkage, and self-healing must be realized. PENETRON ADMIX is the world’s most effective and economic permeability-reducing concrete admixtures, as defined by tests of the American Concrete Institute (ACI). It provides comprehensive protection against concrete deterioration and chemical attack.

“Previously, Namibia was heavily reliant on energy imports from South Africa, Zambia, and Zimbabwe,” notes Clive Leader. “With the successful construction and start-up of the first phase of the Ombepo Wind Farm, that situation is slowly changing. Solar panels and wind-generated electricity are the path toward the country’s electricity independence, and Penetron is proud to be part of this transformation.”

The Penetron Group is a leading manufacturer of specialty construction products for concrete waterproofing, concrete repairs and floor preparation systems. The Group operates through a global network, offering support to the design and construction community through its regional offices, representatives and distribution channels.