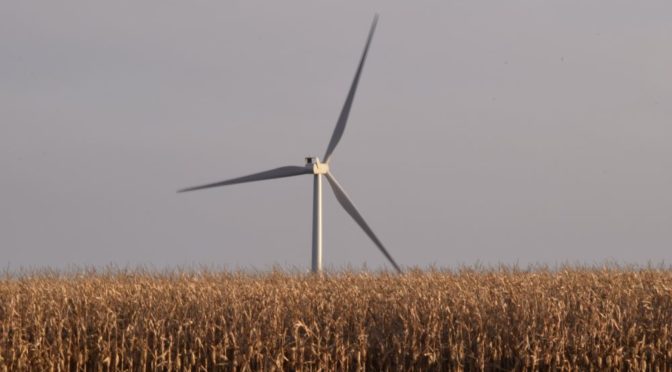 2018 may be in the rearview mirror, but let’s take a moment to reflect on another year of incredible progress for American wind power.

Wind energy made huge strides across the U.S., from the shores of Massachusetts all the way out to California and dozens of places in between. And that’s good news for families and businesses, because it means access to more affordable, reliable, clean electricity is on the way.

As we look back, here are some of the high points that stood out to us:

Here’s a remarkable fact: There has never been more wind power under construction in the U.S. than right now, which means America’s 105,000 wind workers and 500 wind-related factories are as busy as ever.

Just under 38,000 megawatts (MW) of new wind projects are under construction or advanced development. That means in just the next few years, the U.S. is poised to add as much new wind as all the wind currently installed in Texas, Oklahoma and Iowa combined, the country’s top three wind states.

Much of this activity is centered in a diverse group of seven states on track to double the amount of wind within their borders: Arkansas, Nebraska, New Mexico, South Dakota, Wyoming, Maryland and Massachusetts. Arkansas also represents a newcomer to the wind club—when an under-construction project there comes online it will become the 42nd state with a utility-scale wind project.

Wind energy is a perfect example of American ingenuity taking a nascent technology, improving it, and bringing it to market viability. Since 2009, the cost of wind has fallen by 69 percent, largely due to technological advances and improved domestic manufacturing. In fact, in many parts of the country wind is now the cheapest source of new electric generating capacity.

2018 saw the first 4 MW land-based turbine orders in the U.S., which are powerful enough to provide electricity for 1,400 homes. That’s almost twice as many homes as the average wind turbine installed in 2017. As technology continues improving, and turbines reach stronger, steadier winds, electricity output will continue increasing and wind will become economically viable in even more parts of the country.

States big and small decided they want more renewable energy in 2018. Connecticut, Massachusetts, California, New Jersey, and the District of Columbia all passed legislation increasing their Renewable Portfolio Standards (RPS). On election day, Nevada voters also passed a ballot initiative to amend the state constitution to include a 50 percent RPS, which now must be approved by the legislature.

We don’t have the final numbers just yet (you’ll need to wait for the release of the Fourth Quarter Market Report later this month), but we already know 2018 was a record year for corporate and other non-utility customers buying wind power. In just the first nine months of 2018, non-utility wind customers signed contracts for more wind power capacity than any other year, for a total of 2,904 MW.

“For us, that’s kind of a gate,” said Apple CEO Tim Cook, explaining why his company built new data centers in Iowa. “If we couldn’t [power them with wind], we would not be here.”

AWEA data show that corporate and other non-utility customers have contracted for more than 10,000 MW of wind capacity through power purchase agreements (PPAs) to date—more than the entire installed capacity of Oklahoma, America’s second largest wind state.

We also saw an uptick in innovation in 2018, from the increased adoption of the Volume Firming Agreements to more companies teaming up to procure renewable energy and the continued expansion of green tariffs from electric utilities. These innovations are making it easier for more companies and other non-utility buyers to enter the wind energy market.

Wind power’s low and stable prices continued to drive strong demand from corporate and other non-utility customers, including a diverse mix of repeat customer and first-time buyers in 2018 including Smucker’s, Boston University, and Royal Caribbean Cruise Lines.

In mid-December, the U.S. Bureau of Ocean Energy Management (BOEM) held an auction to develop three wind energy areas off the coast of Massachusetts. No one expected the results.

The winning bids for each of the three lease areas reached $135 million—shattering the previous high of $42 million, set in 2016. This is yet more proof that companies see enormous business potential in developing offshore wind projects. That’s great news for communities up and down the East Coast, as offshore wind development will create new jobs, a new domestic supply chain, and port revitalization.

It shouldn’t come as a surprise that wind power is an increasingly integral part of the U.S. power grid. All you have to do is look at the records wind is setting across the country.

With a record number of wind projects under construction and a mounting development pipeline, wind will continue to set records across the country in the years ahead.