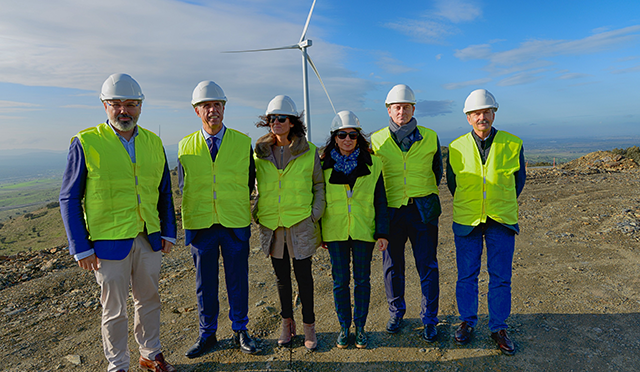 The wind farm, which is being constructed by the renewables subsidiary of Naturgy in Plasencia, is the first in Extremadura and will produce 155 GWh per year, which equates to the annual electricity consumption of 44,000 homes.

Accompanied by the Director for Generation Development of the multinational power company, Carlos González, and the Development Manager of the renewables subsidiary of Naturgy in Extremadura, Ana Ruiz, the Regional Minister for Economic Affairs and Infrastructures in Extremadura, Olga García, and the Mayor of Plasencia, Fernando Pizarro, visited the construction site of the Merengue Wind Farm, which is being built by Naturgy and is the first in the region, earlier today.

During their tour, the officials visited some of the wind turbines that are already installed and the works currently being completed to assemble other wind turbines and finish the electricity substation for the wind farm.

“By developing this project, Naturgy is strengthening its commitment to Extremadura. Furthermore, this project demonstrates the company’s strong commitment to increasing renewable generation, as reflected in our 2018-2022 Strategic Plan,” said Carlos González, Generation Development Manager of Naturgy.

The Regional Minister for Economic Affairs and Infrastructures, Olga García, said that this wind power generation project, in combination with those currently undergoing the corresponding administrative procedure and with an investment that could surpass €4.3 billion over the next five years, put Extremadura “in an advantageous position”.

“It is an extremely important opportunity to help meet climate change targets but also for economic activity and employment, as well as industrial development and R&D&I in our region,” she said.

In turn, the Mayor of Plasencia, Fernando Pizarro, underlined the good pace at which work is proceeding and thanked Naturgy for its commitment to the city of Plasencia. He also stressed that, “thanks to this project, which is already a reality, Plasencia has returned to the cutting edge of the future and renewable energies”. 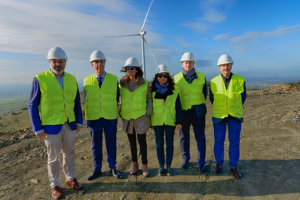 From left to right: The Mayor of Plasencia, Fernando Pizarro; the Generation Development Manager of Naturgy, Carlos González; the Regional Minister for Economic Affairs and Infrastructures, Olga García; the Naturgy Generation Projects Manager in Extremadura, Ana Ruiz; the Director-General for Industry, Energy and Mines, Samuel Ruiz, and the Chairman of Enresa, José Luis Navarro.

The Merengue Wind Farm will have an installed power of 40 megawatts (MW) and will generate around 155 GWh per year, equal to the annual electricity consumption of 44,000 homes.This project represents an investment of some €40 million and is creating approximately 250 construction-related jobs.

This infrastructure will enable a reduction in the use of other conventional sources to generate electricity, reducing CO2 emissions by around 120,000 tonnes per year as well as other environmentally harmful emissions.

The wind farm will have a total of 15 wind turbines. They will be Siemens Gamesa G126 model wind turbines, with a 2.625 MW unit capacity, a height of 84 metres from the base to the bushing and a rotor diameter of 126 metres.

Furthermore, Naturgy is currently studying a number of other projects for development in the region, thus confirming the company’s commitment to Extremadura.

The renewables subsidiary of the multinational power company closed 2017 with an installed capacity in operation of 1,147 MW in Spain (979 MW from wind, 110 MW from mini-hydroelectric plants and 58 MW from cogeneration and photovoltaics).

The company plans to build a number of renewable energy projects in various autonomous regions over the coming months that will double its size by the end of 2019.