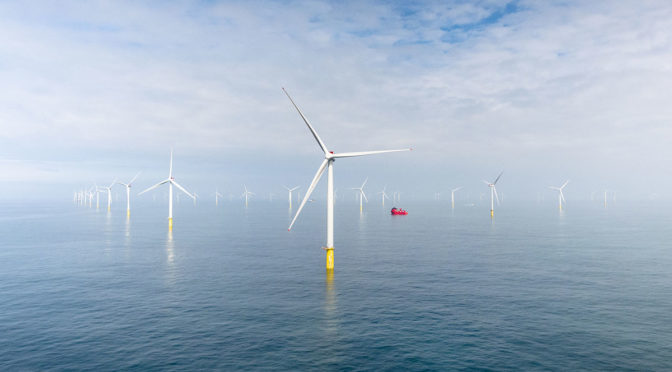 Construction of Germany’s 385 MW Arkona offshore wind farm in the Baltic Sea has been completed at a new record speed: The workers needed less than three months to erect 60 wind turbines.
“The joint project between E.ON and the Norwegian energy company Equinor completed the installation of the wind turbines in record time and is largely finished. The 60th and last turbine was installed in the German Baltic Sea,” said a press release from E.ON.

The construction time of just three months for 60 six-megawatt wind turbines, including loading, weather downtimes and technical maintenance, was faster than ever before in the industry. As the company responsible for the construction and operation of Arkona, E.ON is setting a new industry standard.

“E.ON and Equinor deserve great recognition. The construction of 60 turbines on the foundations in less than three months is the fastest installation ever achieved worldwide,” congratulates Jörg Kuhbier, Honorary Chairman of the Offshore Foundation.

“I congratulate the operators on the quick finalization of the wind farm. The excellent offshore infrastructure of the port in Mukran on the island of Rügen has made its contribution to this. The offshore wind farm Arkona sets a benchmark for the offshore wind business in Germany and beyond,” emphasizes Christian Pegel, Minister for Energy, Infrastructure and Digitization in Mecklenburg-Western Pomerania.

Holger Matthiesen, Project Director E.ON Climate & Renewables: “The Arkona project has completed the installation of the wind turbines safely and extremely efficiently. We are proud of this record. It is the result of excellent teamwork with our partners Siemens Gamesa, A2Sea and Port Mukran.”

The wind farm Arkona has been producing renewable energy since September 2018. The construction of the offshore wind farm will be completed within the next few months. Arkona is scheduled to go into full operation in 2019.

The Arkona project is located 35 kilometers northeast of the island of Rügen. The wind farm will have a capacity of 385 megawatts and can theoretically supply around 400,000 households with renewable energy. The investment volume amounts to €1.2 billion. Arkona saves up to 1.2 million tons of CO2 annually compared to conventionally generated electricity. 60 six-megawatt class turbines from Siemens have been installed. Arkona is a joint venture between E.ON and the Norwegian energy company Equinor.