Generation structure for the month of August 2018 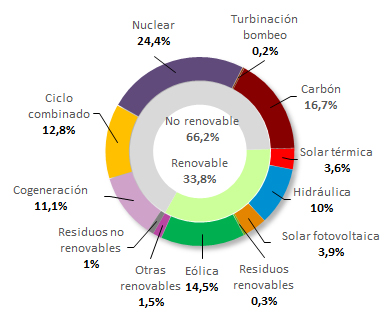 The peninsular demand for electrical energy during the month of August reached 22,095 GWh, the highest in this month of the last ten years, consequence, mainly, of the registered temperatures, above the average values ??typical of this month.

Regarding the electric power generation structure, hydroelectric power plants continue to be the source with the largest monthly increase in production, 94.4%. This increase is explained by comparing with 2017, a very dry year. The hydraulic production of August 2018 has been in normal values for this period of the year and has represented 10% of the total generation.

The production of renewable origin in the peninsular system during this month has grown by 14.4% over the previous year, representing 33.8%, favored by the increase in hydraulic generation that energy has produced 7.4% less than in August of last year.