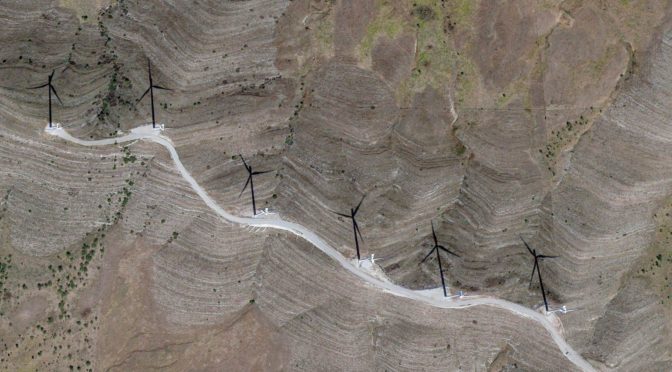 Most of Oklahoma’s wind turbines are located in the western half of the state and are part of 58 distinct, multiple-turbine wind farm projects that vary in size, the data show, ranging from small installations like the nine-turbine Buffalo Bear wind farm near Buffalo, Okla., to the 162-turbine Balko Wind Project in the Panhandle’s Beaver County.

Oklahoma ranks No. 2 in the nation for installed wind power capacity, according to a report from the American Wind Energy Association.

This electricity — enough, the association estimates, to power the equivalent of 2.3 million homes — is generated by 3,736 wind turbines operating in Oklahoma, a public dataset compiled by the U.S. Geological Survey, AWEA and Lawrence Berkeley National Laboratory show.

A handful of turbines exist on their own, outside of wind farm projects, such as the 100-kilowatt turbine at High Plains Technology Center, which is used to train students in wind energy careers.

The data, which is current to April 2018, also show a wide range in the size and scale of individual turbines in Oklahoma.

On the small end, there’s the 100-kilowatt Northern Power Systems turbine that stands about 156 feet tall and generates electricity for the wastewater treatment plant in Guthrie. Compare that to the powerful Vestas V126 turbines, which hover around 500 feet tall and can pump out 3.3 megawatts each at wind farms like Bluestem and Frontier I in Beaver and Kay counties.

Wind energy generated about 6.3 percent of the nation’s electricity supply in 2017, according to U.S. Department of Energy estimates, which also show the average capacity of newly installed turbines is increasing, as is turbine size and blade length, while technology costs and wind power prices are dropping.