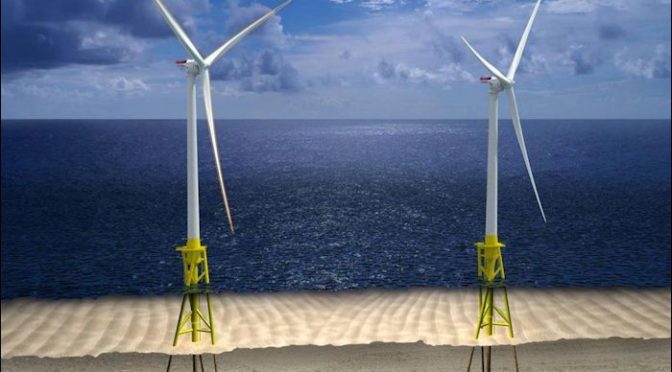 Dominion Energy Virginia has submitted to the State Corporation Commission a proposal to build two wind-generating turbines 27 miles off the coast of Virginia Beach — arguably the most expensive research project ever funded by the Commonwealth. The experimental turbines will not produce 12 megawatts of electricity at a remotely economic cost. But they will provide data that could pave the way for a vast wind farm that would produce electricity far more economically.

The project will test new designs to anchor the turbines in seabed conditions found off the Virginia coast and to withstand hurricane-force winds. The feedback is necessary before anyone undertakes utilizes the technology in a wind farm with dozens of turbines potentially costing billions of dollars.

The power company has been trying to advance the two-turbine project for several years but refrained from filing with the SCC for fear that the Commission would reject it as too risky and expensive. What’s different this time? First, it has lined up an experienced partner, Ørsted, a Danish company that has installed more than 1,000 turbines in European waters, to manage the project. Second, it has brought down the cost to about $300 million, significantly lower than previous iterations. Third, with the enactment of the Grid Modernization and Security Act, the state has declared wind power to be in the public interest.

And fourth, Dominion says that it can build the turbines without increasing rates. The project, said CEO Thomas F. Farrell II at the announcement in Norfolk yesterday, “will not increase customer rates even a penny.”

Here’s how I understand how that works. Before enactment of the Grid Transformation Act, Dominion would have paid for a large capital project like this one through a Rate Adjustment Clause, in which capital costs would be passed along to customers. The selling point of the Grid Transformation Act is that rates remain frozen but Dominion will apply excess earnings, which normally would be returned to customers, to renewable energy, energy-efficiency and grid-upgrade projects instead. It’s a convoluted way to go about things, but it has the virtue of stability.

One last point: Just because the General Assembly has declared wind energy to be in the public interest, that’s no guarantee the SCC will go along. The SCC still has to balance cost, reliability and environmental sustainability — along with risk. Three hundred millions dollars is a lot of money to spend on what amounts to a research project. In analyzing the pros and cons of the experimental wind turbines, the SCC presumably will look also at the pros and cons of the wind farm that the experimental turbines would make possible. Given the lack of an established wind-power infrastructure on the East Coast, how much would a full-fledged wind farm cost to build? How would the cost of electricity compare to other energy sources? And would such an intermittent energy source improve or diminish the reliability of Virginia’s electric power supplies?
James A. Bacon
baconsrebellion.com