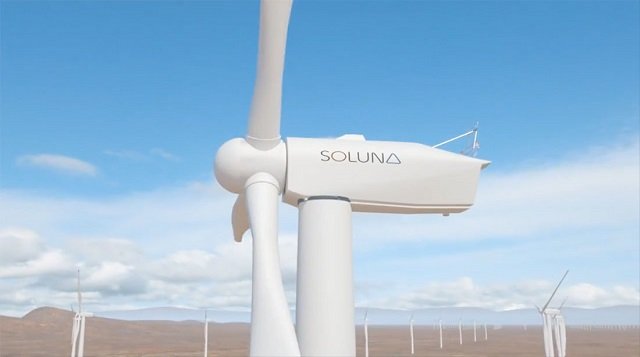 Soluna Technologies, Ltd. has unveiled plans to build its own wind farm power plant in Southern Morocco in one of the world’s windiest regions and combine it with the company’s private computing facilities to help power the blockchain in a more eco-friendly and sustainable way.
The New York-based computing company, backed by Brookstone Partners, will develop the flagship wind site in a modular fashion called Pods. Each Pod comprises 12MW of power generation, an associated storage system, and a 6MW cryptocurrency mining or Blockchain computing center.
The full site can accommodate approximately 75 Pods, based on current turbine technology. The first phase will consist of three Pods, or the equivalent of 36MW of energy production capacity, and 18MW of computing facilities with the ability to produce 160,882 tera hash per second.
Soluna’s flagship site covers 37,000-acres with over 900 Megawatts of wind power potential. It is a Class I wind site, where wind speeds reach over 22 miles per hour, making it one of the highest quality wind sites in the world.
“Our vision is to power the blockchain with clean, renewable energy that we own and control,” says John Belizaire, CEO of Soluna. “Soluna will address the growing demand for energy to power today’s growing blockchain networks, and will create the world’s first “service node,” providing high-density computing for future blockchain networks.”
According to Soluna, the blockchain technology will fundamentally alter the way we exchange practically anything, offering unparalleled security and speed, whether it be social networking, file storage, advertising, marketing, supply chain, or national property records. A host of industries stand to be radically transformed using blockchain technology.
By developing renewable energy power plants dedicated to on-site, high-density computing, Soluna seeks to bring vertical integration to the blockchain ecosystem. Its energy systems and computing facilities will be self-contained, distributed, scalable, and flexible.
Morocco is planning to produce over 52 pc of its electricity through green power by 2030 and create over 6,000 Megawatts of renewable projects by 2020.
Soluna’s wind farm will be an off-grid operation, with the plan to integrate it with the grid. This company was founded in 2018 with the mission to power the blockchain-economy with clean, low-cost renewable energy via the world’s first vertically-integrated blockchain computing company that owns and controls dedicated renewable energy resources.