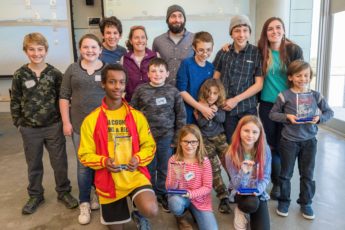 Two teams of students from Corolla’s Waters Edge Village School traveled to Chicago in May to compete in the National KidWind Challenge, a national wind turbine engineering contest.

The teams — Turbinders and Flying Force of Nature — qualified by winning first or second place in their age division at a KidWind Challenge event in February at the UNC Coastal Studies Institute.

For the February event, each team tested its hand-crafted wind turbines in a wind tunnel, calculating the energy output of the turbines. Waters Edge Village School middle school students came home with first and second place prizes for their age group.

Those wins qualified the teams for the national event in Chicago.

During the Chicago competition, the teams tested their wind turbines in four different wind tunnels. In addition, each team had to complete a knowledge test to display their understanding of wind energy concepts and two “Instant Challenges.”

These short challenges were unknown to the teams before the event and required quick problem-solving and engineering skills. Both teams did well on the instant challenges, but the Turbinders were further recognized by the judging panel for their job well done.