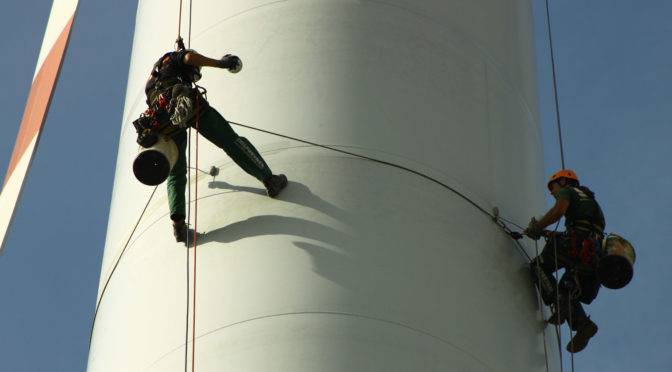 Today Ameren Missouri, a subsidiary of Ameren Corporation (NYSE: AEE), announced that it has entered into an agreement to acquire, after construction, a 400-megawatt wind farm in northeast Missouri, the largest ever in the state.

“We are excited to take this transformative step to bring more renewable generation to our customers,” said Michael Moehn, president of Ameren Missouri. “Adding more wind energy will help us achieve our goal to reduce carbon emissions 80 percent by 2050.”

The facility would be built by an affiliate of Terra-Gen, LLC in Adair and Schuyler counties. Groundbreaking is expected in summer 2019. The wind farm will consist of 175 American-made wind turbines that will stand more than 450 feet above the ground. These types of turbines will be among the most technologically advanced in the state. Energy produced by the wind farm will power an estimated 120,000 homes by 2020.

“This major wind development would benefit our customers, the communities we serve and the environment,” said Ajay Arora, vice president of power operations and energy management at Ameren Missouri. “Missouri-based wind generation recently became an affordable option. These planned investments in wind energy would help keep customers’ rates more stable over time. Our state would also benefit from continued investment and economic growth, including hundreds of construction jobs, as well as permanent jobs when the turbines are in service.”

“The new transmission line is vital to the expansion of renewable energy generation and distribution in Missouri,” Moehn said. “In addition to being an engine for economic growth, the Mark Twain Transmission Project will strengthen our region’s energy grid and deliver greater energy reliability.”

The transaction is subject to a number of conditions, including timely approval from the PSC and obtaining a timely and acceptable Midcontinent Independent System Operator transmission interconnection agreement.

Today’s announcement is the first major step in implementing Ameren Missouri’s Integrated Resource Plan, a 20-year outlook that supports cleaner energy in the state. The plan is consistent with Missouri’s Renewable Energy Standard passed by voters in 2008. Planned investments include approximately $1 billion to build wind generation projects in Missouri and possibly neighboring states, resulting in at least 700 megawatts of new wind-generated energy by 2020. This wind farm would meet more than half of that planned capacity. Ameren Missouri also expects to add 100 megawatts of solar-generated energy over the next 10 years, with 50 megawatts targeted to come online by 2025.

Ameren Missouri has been providing electric and gas service for more than 100 years, and the company’s electric rates are among the lowest in the nation. Ameren Missouri’s mission is to power the quality of life for its 1.2 million electric and 130,000 natural gas customers in central and eastern Missouri. The company’s service area covers 64 counties and more than 500 communities, including the greater St. Louis area.