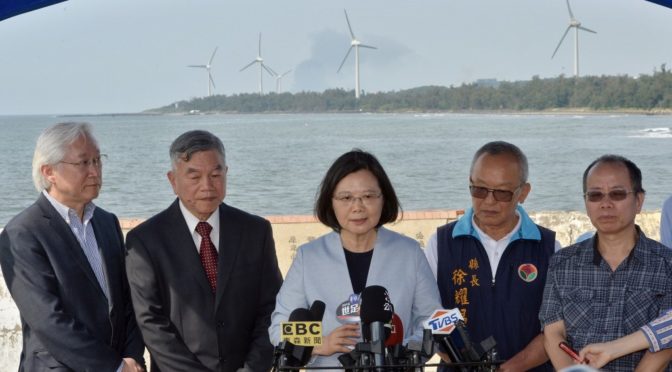 Not only will the projects provide a new source of power, but also help create 20,000 new jobs, Tsai said at a ceremony held in Changhua County.

Earlier this week, the government announced the results of its tender for offshore wind power sites to be built off the country’s west coast. The projects for 10 offshore wind farms, which will have installed capacity of 3,836 megawatts by 2025, have been awarded to seven developers.

Two of the developers were state-run Taiwan Power Co. (Taipower) and China Steel Corp., which is the largest steel maker in Taiwan.

In her speech, President Tsai reiterated the government’s aim to increase the amount of electricity generated from renewable sources nationwide to 20 percent of total supply by 2025.

The projects could stimulate nearly NT$1 trillion (US$33.65 billion) of new investment in the country, she said, which will help encourage local systems and material supply chains to upgrade and improve their capability in offshore marine construction as well as engineering.