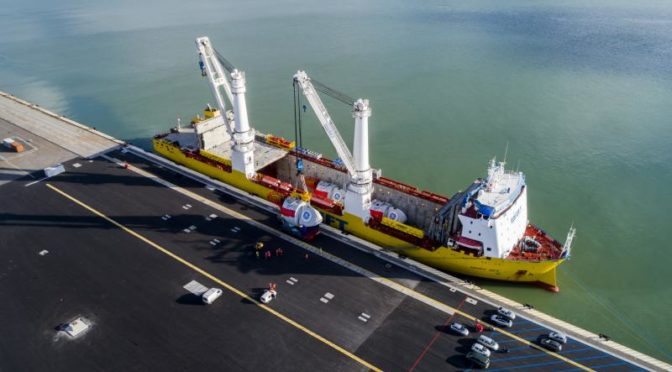 GE Renewable Energy announces the depart of the last set of nacelles to be shipped this year to Merkur’s Offshore Windfarm logistical hub in Eemshaven Netherlands. By the end of the month this hub will have received 24 nacelles, 24 blades, and several other tower fragments and transition pieces. With all these component in-place, local teams will perform some pre-assembly works while getting prepared for the installation phase that is set to begin mid-February 2018.

The offshore turbines have three main components – nacelles, towers, and blades — that are manufactured in different locations and then shipped to Eemshaven, where they are prepared for the eventual installation at sea. Nacelles are produced in Saint-Nazaire (France), the blades are made in Castellon (Spain) by LM Wind Power, and the towers are manufactured in Germany and China.

Remaining nacelles, blades and tower pieces will continue to be shipped to Eemshaven logistical hub until mid-summer 2018. Installation of the 66 GE Haliade 150-6MW is expected to be completed by end of September 2018.

Laurent Verdier, GE’s Offshore Wind Project Office Leader said “with this shipment, one third of our 66 GE’s Haliade 150-6MW nacelles for Merkur Offshore windfarm will be in the logistical hub, where local teams will get ready for the installation phase. Thanks to the good work of our teams, we are right where should be with this important project.”

Merkur windfarm is located approximately 35km north of the island of Borkum, Germany, in the North Sea, and consist of 66 turbines that will generate approximately 1,750 GWh annually, enough clean energy to power around 500,000 homes. When completed, Merkur will be one of Germany’s largest offshore wind farms.

The Haliade™ 150-6MW turbine was specifically designed for a marine environment. Thanks to its 150-metre rotor, its output is 15% higher than the offshore turbines of the same generation, and can save up to 21,000 metric tons of CO2 annually. At a total height of 170 metres, the Haliade is almost twice as tall as Big Ben, and its 150-meter diameter blade is comparable to twice the wingspan of an Airbus.

GE Renewable Energy is a 10 billion dollar start-up that brings together one of the broadest product and service portfolios of the renewable energy industry. Combining onshore and offshore wind, hydro and innovative technologies such as concentrated solar power, GE Renewable Energy has installed more than 400+ gigawatts capacity globally to make the world work better and cleaner. With more than 12,000 employees present in more than 55 countries, GE Renewable Energy is backed by the resources of the world’s first digital industrial company. Our goal is to demonstrate to the rest of the world that nobody should ever have to choose between affordable, reliable, and sustainable energy.