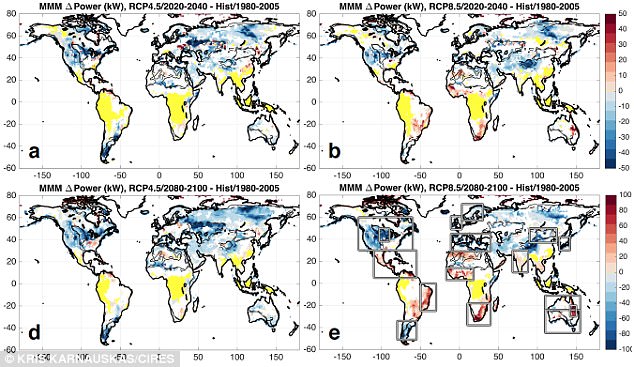 Climate change will soon cause global wind power to flip hemispheres, researchers have claimed. The new study predicts wind resources in the next century may decrease in many regions in the Northern Hemisphere – and could sharply increase in several hotspot regions down south. Climate change will drive the flip, researchers wrote in the journal Nature. 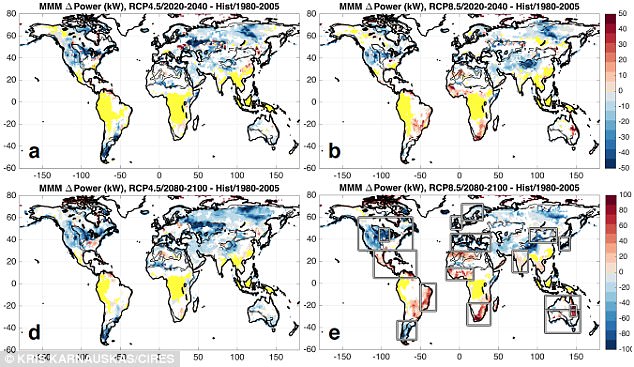 ‘There’s been a lot of research looking at the potential climate impact of energy production transformations-like shifting away from fossil fuels toward renewables,’ said lead author Kris Karnauskas, CIRES Fellow and Assistant Professor in Atmospheric and Oceanic Sciences (ATOC) at CU Boulder.

‘But not as much focuses on the impact of climate change on energy production by weather-dependent renewables, like wind energy.’

Wind powers only about 3.7 percent of worldwide energy consumption today, but global wind power capacity is increasing rapidly – about 20 percent a year.

Researchers used an international set of climate model outputs to assess changes in wind energy resources across the globe.

The team then used a ‘power curve’ from the wind energy industry to convert predictions of global winds, density and temperature into an estimate of wind energy production potential.

While not all of the climate models agreed on what the future will bring, substantial changes may be in store, especially a prominent asymmetry in wind power potential across the globe.

Strangely, the team also found that if emission levels are mitigated, dropping lower in coming decades, they see only a reduction of wind power in the north – it may not be countered with an increase of power in the south.

For example, the prairies of the American Midwest – persistently windy today and in recent decades – are dotted with tens of thousands of turbines.

While the new assessment finds wind power production in these regions over the next twenty years will be similar to that of today, it could drop significantly by the end of the century.

There were different reasons for the Northern decline and the Southern increase in wind power potential in the high-emissions scenario, Karnauskas and his co-authors found in their modeling results. In the Northern Hemisphere, warmer temperatures at the North Pole weaken the temperature difference between this cold region and the warm equator.

‘These decreases in North America occur primarily during the winter season, when those temperature gradients should be strong and drive strong winds,’ said Associate professor Lundquist, who is also a RASEI Fellow.

In addition to North America, the team identified possible wind power reductions in Japan, Mongolia and the Mediterranean.

This may be bad news for the Japanese, who are rapidly accelerating their wind power development.

In the Southern Hemisphere, where there is more ocean than land, a different kind of gradient increases: land warms faster than the surrounding, much-larger oceans. That intensified gradient increases the winds.

Karnauskas and colleagues Julie Lundquist and Lei Zhang, also in ATOC, wanted to better understand likely shifts in production for their paper in Nature Geosciences.