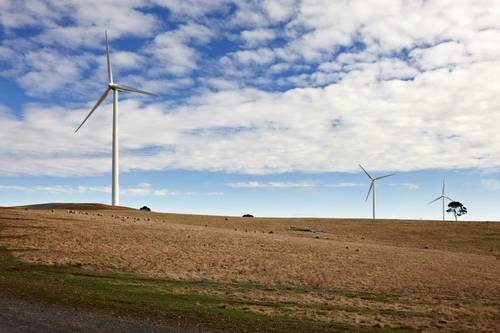 Outside of his professional life, energy for Clive Turton means being able to surf, compete in triathlons and raise a family in the healthy outdoors. But as Asia Pacific President for Danish renewables company Vestas, his passion for energy comes in the form of championing wind power for an ethically sustainable future.

“It’s good for the environment and I want my children and their children to be able to enjoy clean fresh air,” Clive says. “The price of renewables today as compared to more than five years ago has significantly decreased. Countries need to recognise it is a clean alternative to burning fossil fuels.”

While Australia wrestles with its own national energy crisis, the goal for Vestas, as a world-leading wind power company, is to be the global leader in sustainable energy solutions. Vestas have been recognised as leaders in wind turbine manufacturing for many years – which is why companies like Australian Ethical have invested in Vestas for some time.

Despite being a Danish company, Vestas is the biggest wind turbine equipment and service provider in Australia. The team has installed around 2 GW of turbines across the country as well as servicing more than 1.7 GW, which is enough energy to service almost 1.5 million homes.

“A single Vestas wind turbine generates around 25 to 40 times more energy than it uses in its entire lifecycle and only emits around 1% of carbon emissions compared to a coal-fired power plant,” says Clive. The company’s newest generation of turbines can in just three hours produce enough electricity to supply the average household for an entire year. The business is also looking at new initiatives like connecting wind turbines with other sources of renewable energy and energy storage systems.

“Renewable energy is plentiful, it is unending, widely distributed and very clean producing no greenhouse gas emissions during production or operation. The global energy system will become ‘zero carbon’ by end of the century and there will be sustained growth in the renewable industry” Clive says.

Clive says that since the installation of the company’s first turbine in 1979, output has improved 100 times over, with continued technology improvements bringing down the cost of wind-generated electricity even further.

While running an ethical business may seem at first like a difficult approach, he says it is really “just good for overall business health”.

“Adopting, owning and driving ethical standards is not only the right thing to do, it really is exemplary to the industry and our various stakeholders.

“More importantly, it can reduce organisational anxiety. Everyone just feels brighter and works better when we do what is intrinsically right. Ethical behaviour just makes good business sense.”

Vestas looks to the UN Sustainable Development Goals to inform the direction of the business. The tenet of ensuring access to affordable, reliable, sustainable and modern energy for all in particular is one of the guiding principles of the company.

“One of our most notable partnerships is with the UN as members of the Global Compact, a strategic policy initiative for businesses that are committed to aligning their operations and strategies with ten universally accepted principles in the areas of human rights, labour, environment and anti-corruption.

“We are also committed to delivering positive impacts, and avoiding or minimising negative impacts, to the communities where we operate. In addition to creating jobs, we have also dedicated ourselves to building educational programs to ensure a sustainable future for these communities.”

Of Australia’s current energy challenges, Clive says societies like ours are built on affordable access to a reliable supply of energy, which Vestas is committed to helping achieve.

On his mind still, is the fact coal plants are being built in many emerging markets. It is his hope more countries will fast-track the adoption of renewables to hasten the decline of coal power and help the planet.

“Climate change and energy security are two of the most significant challenges the world faces today and future generations will inherit tomorrow,” Clive says. “Companies, as responsible members of global society, and as energy consumers, can make a choice for positive change.

“We encourage everyone to address the consequences of climate change by investing directly or indirectly in renewable energy.

“Our vision for the near future is one in which renewable energy represents a majority of global energy supply, seamlessly integrated to the grid.”