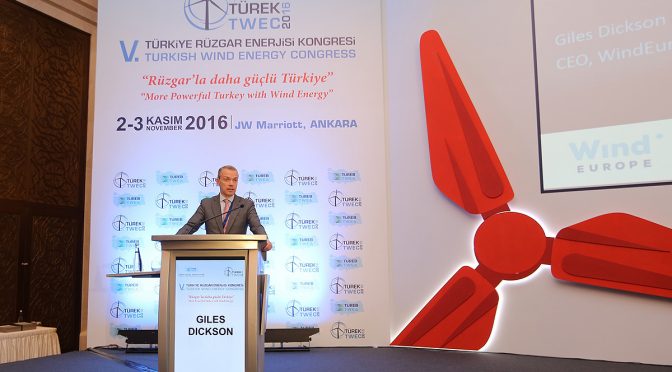 Turkey aims to have $5 billion in wind energy investments by the end of this year, with the awarding of additional wind capacity tenders, the president of the Turkish Wind Energy Association, Mustafa Serdar Ataseven, said in an interview with Anadolu Agency published on Friday.

Currently, Turkey has 11 GW of wind power stock on hand, Ataseven said, adding that the national target is to reach 20 GW of installed capacity by 2023.

The Turkish government looks to raise the share of renewable sources in the country’s total installed power to 30 percent by 2023. By that time, Turkey aims to have total installed power capacity of 120 GW. The plan through 2023 also envisages installing 1 GW of geothermal and 5 GW of solar energy, but also increasing coal-fired installed capacity from the current 17.3 GW to 30 GW.

Under the YEKA model, Turkey picked in August this year a consortium led by Germany’s Siemens as the winning bidder in a tender for the construction of a 1,000-MW wind power plant and wind turbines, for a total project investment of $1 billion. Siemens—together with Turkish firms Kalyon and Turkerler—beat eight other competitors, including China’s Ming Yang, Germany’s Enercon, and Denmark’s Vestas.

The turbines are planned to come online by 2019, Albayrak said in August.

According to Kazim Turker, chairman of Siemens’ consortium partner Turkerler, 35 percent of the project financing will come from international sources.

By Tsvetana Paraskova for Oilprice.com