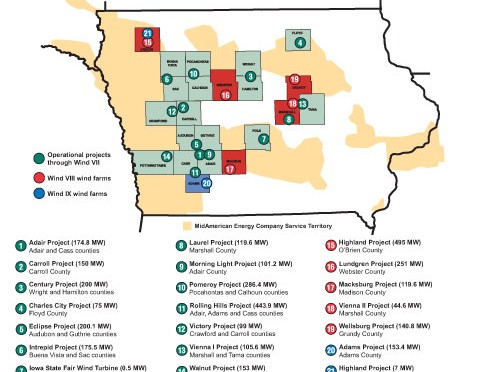 Using a massive crane and ropes, about a half dozen men carefully shift a 13,450-pound wind turbine blade until its steel poles match up with holes in a massive hub, slowly sliding in.

The “stabbing” takes about a half hour — the growing wind speed Wednesday made the process trickier than normal, says Spencer Moore, MidAmerican Energy’s vice president of generation.

Eventually, all three blades and the hub — weighing about 92,000 pounds — will be lifted and attached to a new nacelle about 213 feet above the ground.

Each upgraded turbine will annually net between 19 and 28 percent more energy for the Des Moines-based, investor-owned utility.

The company is beginning with its first three wind farms, built in 2004 in northern Iowa.

When the work is done — and the company finishes a $3.9 billion expansion that will add an additional 1,000 more turbines on top of the 2,020 it already has around the state — MidAmerican expects to supply about 95 percent of its customers’ energy needs with wind.

Both projects should be completed by the end of 2020.

Iowa snagged 36.6 percent of its energy from wind last year, placing it first nationally for share of energy coming from wind.

MidAmerican has said wind energy helps keep electricity costs down. The utility has agreed to freeze rates until at least 2029.

The country’s production tax credits play a role in MidAmerican’s rush to upgrade its oldest turbines. The tax credits are scheduled to be phased out by 2020.

A U.S. House tax bill released this month would scale back the credits, a move that’s drawing opposition from U.S. senators.

Sen. Chuck Grassley, an Iowa Republican, said he’s working with Senate finance members “to see that the commitment made to a multi-year phase-out remains intact.”

Moore said the upgrade will extend the life of MidAmerican’s turbines an estimated 20 years.

The old equipment being replaced will likely get recycled by the manufacturer, General Electric, which is providing the new equipment.

About 200 workers — a mixture of MidAmerican, GE and Mortensen, the Minneapolis-based construction company — have been rebuilding the turbines on the 27-square-mile wind farm since September.

Construction crews often work overnight, when winds die down and blades and nacelles can be lifted. Work stops when wind speeds top 20 mph.