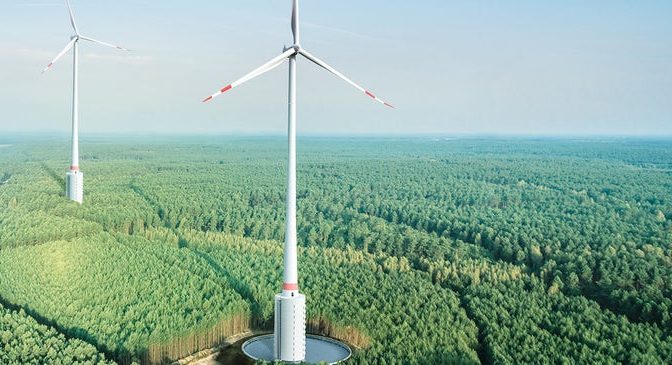 Max Bögl Wind has announced the construction of the world’s tallest turbine in Gaildorf, near Stuttgart in Germany. The tri-blade giant has a hub height of 178 meters (584 ft), with a total height from ground to tip of the blade of 264.5 m.

The new turbine is part of a four turbine wind farm pilot project. Other hub heights manage to rise up as far as 155 m, and all are equipped with customized 3.4 MW GE generators. The project also sees a novel storage concept come into play. The so-called water battery should allow the turbines to continue operation at times when they would normally be throttled back or stopped altogether, such as during strong winds.

The wind turbine foundations double as a passive water reservoir for a pumped storage hydro power station situated in the valley below, while also pushing the turbine 40 meters further into the sky.

Each extra meter of hub height is expected to increase annual energy yield by up to 1 percent, while high hub heights also result in less wind turbulence and much better wind yield, making these behemoths a particularly good fit for inland locations with poor wind conditions.

The water battery reservoirs, which have been designed for 70 MWh of electrical storage capacity, are connected by underground polyethylene penstock to the hydro power station.

“The water battery, which was also referred to as natural power storage in the Gaildorf pilot project, can store surplus power from the grid and release it when necessary,” explains the company. “It acts as a short-term storage facility and helps to maintain grid stability while guaranteeing a continuous, uninterrupted supply of power. The pumped-storage plant is able to switch between production and storage within 30 seconds.”

The Gaildorf pilot project is expected to start feeding into the grid early next year.