Falling costs, an expanding customer base, and growing recognition of the role clean energy will play in building a prosperous economy will drive the wind energy industry’s continued expansion in Canada, business leaders agreed as the Canadian Wind Energy Association’s (CanWEA) 33rd Annual Conference and Exhibition wrapped up at the Palais des congrès de Montréal. 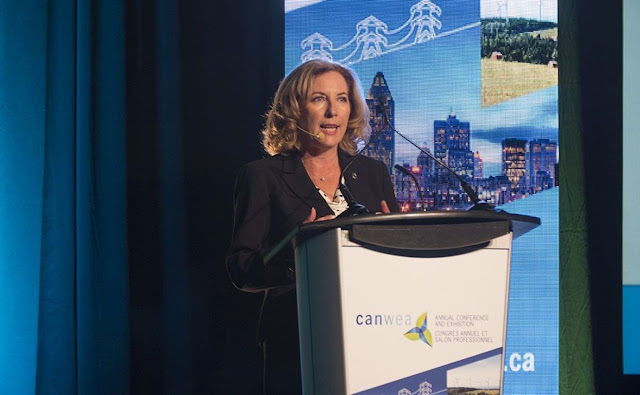 Today, the final of the three-day event featured a keynote address from Kim Rudd, Parliamentary Secretary to Canada’s Minister of Natural Resources, the Honourable Jim Carr, who talked about the federal government’s strategy for ensuring Canada’s natural resources get to market sustainably while creating opportunities in the shift to a low-carbon future, a shift that requires supportive policy, strategic infrastructure investments, and the engagement of Canadians in defining Canada’s energy future.

The Honourable Sergio Marchi, CEO of the Canadian Electricity Association, used his keynote address on the conference’s second day to deliver a similar message, noting that Canada’s non-emitting electricity supplies are key to capturing new clean growth opportunities and doing so requires new approaches to the planning and operation of the electricity grid, policy considerations and public education.

On the same day, CanWEA President Robert Hornung also discussed the importance of clearly defining the scale and scope of the role natural gas will play in transitioning Canada to a 100 per cent non-greenhouse gas-emitting electricity grid to provide clarity for investors and reduce the risk of stranding assets which would impose additional costs on investors and consumers.

The conference’s line up of expert speakers offered their perspectives on the actions needed to spur new investment and innovation, including expanding transmission infrastructure, encouraging electrification, and designing electricity markets that recognize the value wind energy brings to a modern electricity grid. The industry has its own work to do, they agreed, by continuing to focus on the technology innovation and operational improvements that are driving costs down.

Conference participants also heard about how the transition to low-carbon energy is opening new opportunities for wind energy to meet increasing demand from consumers for low-cost, stable-priced, and sustainable electricity.

“Clean energy and clean technology will be among the great growth stories of the 21st century, and that offers significant opportunity for Canada, and for Canada’s wind energy industry, to provide the innovative solutions required as the economy evolves.”
– Kim Rudd, Parliamentary Secretary to Canada’s Minister of Natural Resources, the Honourable Jim Carr

“Canada’s wind industry is leaving this year’s conference energized and excited about what lies ahead. Wind energy represents the future, one that will rely on a smarter and more sophisticated electricity grid to provide the carbon-free, low-cost energy that will unlock new clean growth opportunities for Canada.”
– Robert Hornung, president, Canadian Wind Energy Association (CanWEA)

“CanWEA 2017 was a reflection of just how dynamic Canada’s wind energy sector is evolving. Those who spent the last 2 ½ days in the education sessions and on the trade show floor walked away with market insight, business deals and connections, as well as access to new technologies and approaches for increasing competitiveness.”
– Larry Turner, president and CEO, Hannover Fairs

CanWEA is the voice of Canada’s wind energy industry, actively promoting the responsible and sustainable growth of wind energy. A national non-profit association, CanWEA serves as Canada’s leading source of credible information about wind energy and its social, economic and environmental benefits. Join us on Facebook, follow us on Twitter and LinkedIn.