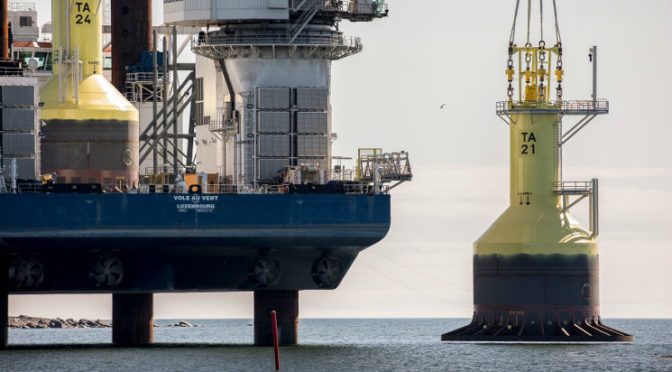 The Tahkoluoto demonstration installation includes 10 turbines with a capacity of 4.2 MW each. The farm, located in the Gulf of Bothnia, the northern-most arm of the Baltic Sea, off Finland’s west coast, has an estimated annual power production of approximately 155GWh with average power production 43 percent of maximum capacity. The rotor hub height is approximately 90 meters and the rotor diameter 130 meters.

The project was undertaken by Finnish company Suomen Hyötytuuli, and the technology development has been on-going since 2010. Conditions for offshore wind power in Finland involve a sea that freezes, a shallow coastline, a hard seafloor and less wind than the North Sea.

A key development in the case of Tahkoluoto was the gravity based steel foundations designed to handle ice loads manufactured locally by Technip Offshore Finland. Following preparation of the seabed to provide a level surface, the hollow gravity base foundations weighing up to 500 tons were installed. A Synchoist load positioning system from Enerpac Heavy Lifting Technology was used for the installation to ensure the foundation remained as close to vertical as possible. This prevented damage to the leveled seabed and facilitated the subsequent addition of the turbine tower.

To handle the foundation lift without distorting the transition piece flange used to connect the turbine tower, an X-frame lifting tool was developed that connected to the flange. It comprised a lifting frame with four Synchoist, self-contained PLC-controlled, double acting, push-pull hydraulic cylinders at each corner, and diesel hydraulic powerpack with battery back-up. High precision maneuvering of the foundation was performed wirelessly by an operator working alongside the foundation installation team. This allowed the operator to lift and lower each cylinder independently to balance, tilt and position the load in response to feedback from the levelling sensors on the foundation.

“We wanted the X-frame lifting tool to be completely self-contained without any hoses or wires connected to the vessel. This way we had maximum flexibility in the movement of the foundation,” says Xavier DeMeulder, marine operations manager, Suomen Hyötytuuli. “The synchoist wireless control was excellent, enabling us to make adjustments of as little as five centimeters during the installation.”

The company believes the technology could be adapted to other sites in the Baltic Sea and also Arctic conditions. The Baltic Sea offers potential logistics savings for offshore wind farm development due to its shallow waters and proximity to shore, reducing cabling costs.