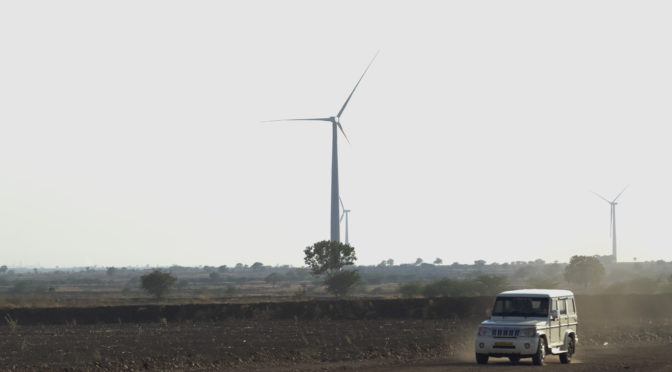 It is the fourth owned by the company in the country, taking its operational capacity there to 163.8 MW.

The new facility will generate an estimated 242 gigawatt-hours (GWh) a year, equivalent to the consumption of over 224,000 Indian homes and avoiding the emission of 232,562 metric tons of CO2 to the atmosphere from coal-fired power stations. The energy generated will be supplied to the utility Bangalore Electricity Supply Company (BESCOM), following the signing of a long-term power purchase agreement (PPA).

This project is the first directly developed and built by ACCIONA in the Indian market, highlighting its capacity to adapt to the specific conditions of the country. The construction of Bannur has created more than 600 direct jobs, contributing to local development in the eighth biggest state in the country in terms of population. The concrete towers on which the turbines will be mounted have been built close to the site in a purpose-built facility.

The turbine nacelles have mostly been assembled in the plant set up by Nordex-Acciona Windpower – a company partly owned by ACCIONA – in the city of Chennai (south-east India). This factory assembles the AW3000 wind turbine, a 3-MW machine in its class II and III versions, which are ideal for sites with the medium-to-low winds that prevail in India.

With the opening of Bannur, ACCIONA now operates and owns its fourth wind farm in India after Anabaru (16.5 MW), Arasinagundi (13.3 MW) and Tuppadahalli (56.1 MW), all of them also located in Karnataka. It was the first Spanish company to install a wind farm in the country, in 2007.

India is the fourth wind power market in the world in terms of installed capacity (only behind China, the USA and Germany), with 28,700 MW accumulated at the end of 2016, and it is one of the countries with the best prospects for growth in the sector. The Indian Government is aiming at 60,000 MW from wind power by 2022 as part of an overall target of 175,000 MW from renewables set for that year. This is in line with the great increase in forecast demand for electricity in the country, which will be 2.6 times higher by 2040 according to the core scenario of the International Energy Agency (IEA).