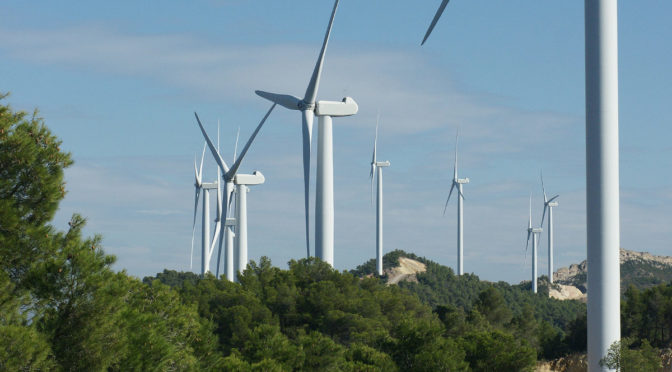 From the intense heat of the Californian desert to the green hills of Scotland, wind turbines are popping up all over the world.

Humans have been using wind energy for thousands of years. Today, its scope and scale is big and getting bigger. According to the Global Wind Energy Council (GWEC), at the end of 2016 more than 341,000 wind turbines were spinning and generating energy.

CNBC’s Sustainable Energy takes a look at the nuts and bolts of wind power – how turbines work, wind energy’s impact on the environment, and its role in the planet’s energy mix over the coming years.

With their considerable height and large blades, modern wind turbines are instantly recognizable.

How they produce energy can be broken down into several parts. Put simply, when the wind blows, a turbine’s blades turn around a rotor. As the U.S. Department of Energy (DOE) explains, the rotor is connected to a main shaft, which in turn rotates a generator to produce electricity.

Wind energy can be produced both offshore and onshore. While the U.S. offshore wind industry is still in its infancy – America’s first offshore wind farm only began commercial operations last December– it is well established in other parts of the world.

According to the GWEC, at the end of last year Europe was home to 3,589 offshore wind turbines. Furthermore, almost 88 percent of the world’s offshore installations were based off the coast of 10 European countries.

The U.K. is a world leader in offshore wind, representing just shy of 36 percent of installed capacity, with Germany and China close behind.

The GWEC says that in 2016 wind power helped the planet avoid more than 637 million tonnes of CO2 emissions.

The executive director of RenewableUK explained to CNBC how wind power had several plus points when it came to the environment.

“Wind energy doesn’t require a fuel source… once we’re built we don’t need to mine for anything and we don’t need to burn fossil fuels which, as we know, are contributing to climate change,” Emma Pinchbeck said.

There are some drawbacks, however. To give just one example, while the Royal Society for the Protection of Birds (RSPB) acknowledges that wind power has a “significant” part to play in the U.K.’s efforts against climate change, it adds that available evidence suggests that wind farms “can harm birds in three possible ways – disturbance, habitat loss and collision.”

Looking forward, the GWEC says that in the European Union, 520,000 people are expected to be working in the wind industry by 2020.

The DOE’s Wind Vision Report says that wind could potentially support more than 600,000 jobs by the year 2050 and help avoid 12.3 gigatonnes of greenhouse gases.

Unsurprisingly, RenewableUK’s Pinchbeck was incredibly positive about the future when it comes to renewables. “If I were an investor and I wanted to put my money on what the cheapest forms of energy were going to be, not just today but in ten years’ time, it would be in renewables by a country mile,” she said.