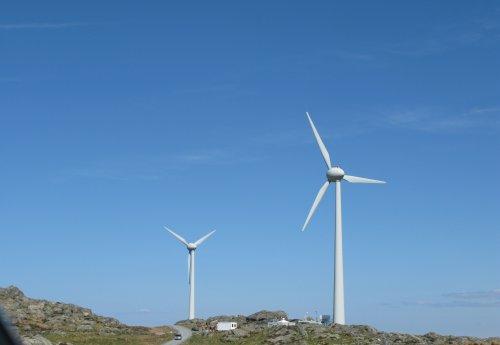 Utsira, situated off Norway’s south-west coast, is home to what is said to be the world’s first full-scale system for cleanly transforming surplus wind power into hydrogen.

Perched atop a 40-metre-high wind turbine on a perfectly windstill day, technician Inge Linghammer explains that at times like this or on days when the gales whipping the unsheltered island get too strong the windmill shuts down and stops pumping out power.

“You need to have back-up power when this happens,” he says, nodding towards the motionless blades.

On a good day, the island’s two wind turbines, planted on a small hill overlooking several red-painted wooden houses, produce more energy than the 210 people living here can use.

When they are down however, most of Utsira, which measures only six square kilometres, is furnished with electricity from the mainland.

But 10 households receive clean, wind-generated electricity regardless of the weather conditions, thanks to a pilot project launched here in July, 2004 making it possible to store wind power by transforming it into hydrogen.

Surplus wind-generated energy is passed through water and, using electrolysis, the hydrogen atoms are separated from the oxygen atoms that make up water molecules.

The hydrogen is then compressed and stored in a container that can hold enough hydrogen gas to cover the energy needs of the 10 households for two windless days.

“Utsira has more than enough wind power to be self-sustained … but the problem arises on a day like today when there is not enough wind,” explains Halgeir Oeya, who heads up the hydrogen technology unit at Norwegian energy giant StatoilHydro, which is running the project.

“This system allows us to deliver power with expected quality and reliability,” he says, standing next to the large metal electrolyser box baking in the spring sun.

Combining renewable energy and hydrogen, he says, makes most sense in secluded areas like the numerous islands lining the European coast or in remote Australian communities, which until now have been heavily dependent on carbon dioxide-spewing diesel fuel provided by a constant flow of truck convoys.

Islands like Utsira have long been considered ideal laboratories for renewable energy due to their total dependence on outside energy supplies and their access to powerful wind energy.

Oeya boasts that the people participating in the Utsira test project have no restrictions on how they use power, switching on the lights, dishwashers, television sets and stereos without a thought to how the wind is blowing.

And amid growing alarm over greenhouse gas-promoted global warming, they can do so with a clean conscience, he says, pointing out that “the only emission is oxygen”.

Producing and storing energy this way however is still, nearly four years after testing began, far more expensive than the hydraulic power produced on Norway’s mainland.

‘They go to look at our windmills’

StatoilHydro has no intention of building up the system to compete with large-scale energy production, but even making it competitive in the small, remote communities far off the grid that make up its target market remains years off.

“This is not a commercial project as it stands,” Oeya acknowledges.

“We must have a bigger scale in order to compete … and this will take a number of years,” he says.

Utsira mayor Jarle Nilsen is nonetheless ecstatic about the system and its effects on his small island community.

“This is a fantastic project that has been good for Utsira,” he says, pointing out that initial concerns about noise levels and birds getting caught in the turbines had been laid to rest.

“We haven’t found a single dead bird,” he says.

Most importantly, the system was helping nudge his Utsira towards its goal of zero emissions within the next decade and had become a major tourist attraction.

“The tourists go over to the lighthouse first, but then they go to look at our windmills. They want to see the world’s first full scale wind and hydrogen project in action,” he says proudly.