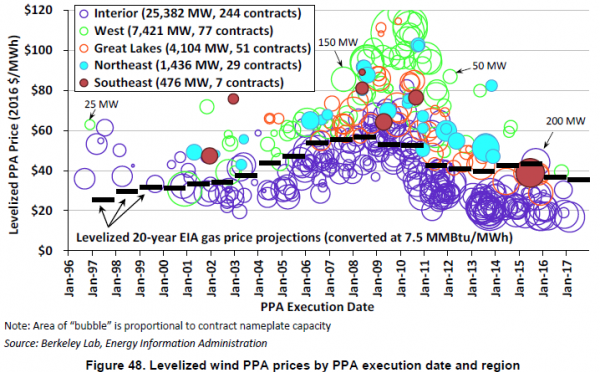 However, the most promising and fastest growing alternative energy is wind power whereby since 5000 BC the wind energy was used to sail boats along river Nile and by 900 AD the Persians had started using it in wind mills to generate power to grind grain and pump water. Professor James Blyth built the first wind mill in Scotland which was used in the production of electric power to light the streets in the year 1887 while in the United States, Daniel Hallady designed the first wind mill which was used to pump water on farms in 1854. The wind mill also facilitated the expansion of railroads through steam driven engines that required water in their operations.

Wind power operates in the sense that air flow is used to drive wind turbines to generate power through conversion of kinetic energy into mechanical power by use of various generators. The first wind mill was constructed with four blades and a tail to turn the wind but over time new developments have given rise to multi-blade system comprising of iron and steel which are easily to maintain. Several wind powers usually a hundred of individuals of them make a wind farm and they are used in the production of electric power in the same location. The wind farm is driven by wind turbines through integration of communication network, power collection system and a medium voltage of 3.5 kV. The products of wind power are known to be plentiful, widely accessed and clean without any production of gas emissions. One of the largest wind farm is said to be Gansu Wind Farm which is expected to produce 20, 000 megawatts when fully completed by 2020. Other large onshore wind farms are such as: Muppal wind farm in India, Roscoe Wind farm in United states and Whitelee Wind farm in United Kingdom.

In the year 2000 and 2006, the capacity and production of wind power quadrupled worldwide and by June 2014, the alternative energy source capacity had expanded rapidly to 336 GW while production of wind energy was estimated to be 4% of total worldwide electric power usage. In order to enhance the capacity growth of wind power and to have its stability, modern and latest variable speed generators are used giving desirable properties for grid interconnection. The specific amount of electric power generated by wind power is obtained by getting a multiplication of nameplate capacity and the capacity factor which will be differentiated with equipment used and the location.

As the fastest growing alternative energy source, small wind plants have been used by various communities worldwide to pump water for farms and ranches increasing food production while new and more developments on wind energy have given rise to applications in lighting buildings and streets from a central generated power. Other applications of wind energy are such as propelling the sailboats in seas facilitating transportation of materials and people from one place to another. With more technological developments which have given rise to low cost of coming up with a wind plant, wind power is said to be more environmental friendly alternative source of energy in many countries as compared to other forms of renewable energy and non-renewable energy.