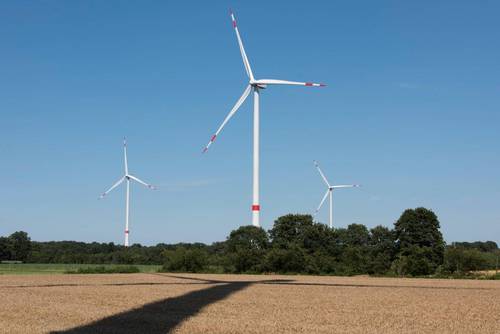 Germany will increase its onshore wind energy capacity by more than 1 gigawatt, equal to that of a nuclear plant, under new licenses awarded on Tuesday, its network regulator said.

The regulator introduced an auction system this year to award licenses, aiming to intensify competition among project developers in order to lower costs and wean renewable energy away from subsidies.

In the second auction under the new system, the Bundesnetzagentur (BnetzA) said it accepted 67 applications, mostly from citizens’ cooperatives, for a combined volume of 1,013 megawatt (MW). Overall, 281 bids with a joint capacity of 2,927 MW had been submitted.

“The second round of tenders, too, was characterized by high competition. Compared with the first round, the average price at which projects were awarded fell by more than 1 euro cent per kilowatt hour,” BnetzA’s President Jochen Homann said in a statement.

The projects, most of which are located in eastern Germany, were approved at an average price requiring a subsidy of 4.28 euro cents per kilowatt hour (kWh), down from 5.71 euro cents/kWh in the first round in May.

Rather than guaranteeing a fixed price for 20 years, as was the case in the past, only those operators that can generate electricity from wind at the lowest subsidy are given a construction license within a fixed capacity.

Citizens’ co-operatives, which are favored in the new auction system over big commercial players in order to make development more acceptable within local communities, accounted for 90 percent of the successful bids on Tuesday.

One more auction round is planned later this year to bring this year’s capacity to 2,500 MW, the annual expansion rate targeted by the government. After the first two rounds, it stood at 1,820 MW.

Renewables accounted for nearly 32 percent of Germany’s power consumption in 2016, with onshore wind the biggest source at 11 percent, according to industry group BDEW. Germany aims for renewables to generate 40-45 percent of its energy by 2025.