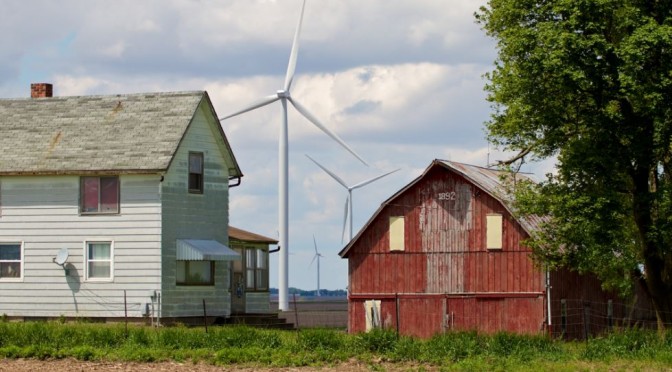 Despite moves made by Ohio’s legislature to thwart the development of large-scale wind farms, there’s still a steady demand for small wind energy installations to power factories and small businesses.

These smaller projects, with just a few turbines, rank Ohio among the top 10 when it comes to the amount of megawatts installed since 2003, according to a new report from the U.S. Department of Energy.

In Ohio, Honda has two turbines at its transmission plant in Russells Point, producing enough electricity to make up for about 10 percent of its purchases from the local utility, according to the automaker.

Whirlpool Corp. has turbines that help power its dishwasher factory in Findlay. There also are turbines that generate electricity for schools.

But the momentum for big wind farms came to a halt in 2014 when state lawmakers increased the minimum distance required between a wind turbine and nearby structures and put a two-year freeze on state standards requiring electricity companies to buy certain amounts renewable energy.

Ohio law now says that by the end of 2027, all power produced by renewable energy make up 12.5 percent of all power sold in the state.

Nationwide, 14 states now get more than 10 percent of their electricity from wind. Ohio still lags far behind, falling outside the top 20 states, according to the Department of Energy.

Last year, the amount of new wind energy from small-scale projects in the state came mainly from one installation, a turbine developed at a Marathon Petroleum pipeline pump station, The Columbus Dispatch reported.

The state’s total of 1.54 megawatt for new projects in 2016 was down from the year before, when there were 7.7 megawatts added.

“That was a quirk of scheduling,” said Jereme Kent, general manager for One Energy, a Findlay company behind many of these small-scale projects. “You’re going to steadily see the numbers ramp up going forward.”