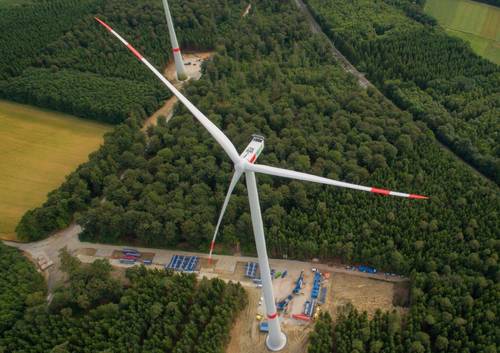 One year ago the Nordex Group installed a N131/3300 turbine with a hub height of 164 metres at the “Hausbay-Bickenbach” site in the Rhineland-Palatinate. Despite only light winds over the past year and the fact that the turbines were not often continuously available due to scheduled measuring activities in the first twelve months the N131/3300 produced more than nine GWh of clean electricity against the backdrop of an average wind speed of 6.1 m/s.

With its overall height of almost 230 metres the turbine is able to make use of the higher-yield layers of air where there is less turbulence, which significantly increases the annual power output. The volume of electricity generated proves that, especially for sites in regions with low average speeds, powerful turbines with a capacity of 3 MW and more, with a large rotor sweep and high towers are ideally suited for highly efficient operation.

Ulrich Kreuzberger, CEO of Kreuzberger und Spengler Regenerative Energie and operator of the N131/3300 in Hausbay: “We are very satisfied with the performance and reliability of the turbine. We are currently in the process of extending the Hausbay-Bickenbach wind farm by adding two more N131/3300s with a hub height of 164 metres.”

The N131/3300 also has an advantage in terms of sound emission. The guaranteed sound power level for the turbine is a low 104.5 dB(A). Measurements on the N131/3300 installed in the Krampfer wind farm in Mecklenburg-West Pomerania at the end of 2015 showed a sound power level of 104.1 dB(A).

Both the electricity produced and the sound levels measured during production in the field underline the theoretical production and sound parameters of the turbine previously calculated by Nordex for both sites.

Kreuzberger & Spengler is an independent family company – founded by Ulrich Kreuzberger and Bernd Spengler and located in Dunningen-Seedorf in the Black Forest. IT is an owner-operated SME that has been planning, installing and operating wind farms for more than 17 years. K&S follows the trend of greater hub heights and in Nordex have found a high-performance partner for this and future projects. www.ks-regenerative-energie.de.