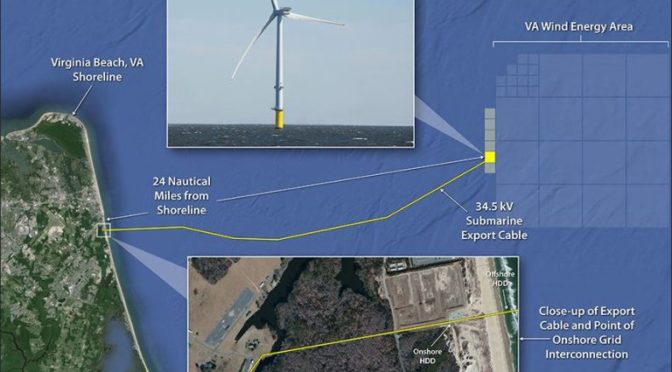 Dominion Energy Virginia has signed a Memorandum of Understanding (MOU) with DONG Energy, the world’s largest offshore wind-power company, to build two 6-megawatt turbines off the Virginia Beach coast — a critical step toward opening up 2,000 megawatts of off-shore wind to development.

Dominion will own the $300 million project, while Dong has committed to delivering the project at a fixed price. A Dominion solicitation in 2015 yielded a low bid of $375 million, way higher than the company’s internal estimates. When a federal grant expired, creating even more exposure for the company, many observers gave up the project for dead.

But the Denmark-based DONG, which claims to have built 27% of the total offshore wind capacity in the world, is eyeing the U.S. East Coast. Besides working with Dominion, the company has formed a partnership with Eversource, a Massachusetts utility, and has committed to develop a major lease off the New Jersey coast. The MOU with Dominion gives the company “exclusive rights to discuss a strategic partnership” with Dominion Energy to develop the commercial site based on successful deployment of the initial test turbines.

“Virginia is now positioned to be a leader in developing more renewable energy thanks to the Commonwealth’s committed leadership and DONG’s unrivaled expertise in building offshore wind farms,” said Thomas F. Farrell, II, Dominion Energy CEO, in making the announcement earlier today at a Port of Virginia facility in Portsmouth.

“Today marks the first step in what I expect to be the deployment of hundreds of wind turbines off Virginia’s coast that will further diversify our energy production portfolio, create thousands of jobs, and reduce carbon emissions in the Commonwealth,” said Governor Terry McAuliffe, who also spoke at the waterside announcement. McAuliffe had pushed hard for the project behind the scenes.

So far, the only offshore wind turbines operating off the U.S. coast are a five-unit farm located off Block Island, Rhode Island. While that heavily subsidized project does have the distinction of being the first offshore wind power, no one expects it to provide an economic model for U.S. offshore development. The Dominion-Dong project could provide that model.

The significance of the new Coastal Virginia Offshore Wind project is not in energy the turbines produce — only 12 megawatts — but in demonstrating how well they hold up under hurricane conditions off the East Coast.

DONG has extensive experience operating in the North Sea, which is known for its harsh weather, but wave and wind conditions off the Mid-Atlantic coast are different. “From a technical perspective, we’re very keen to learn about Mid-Atlantic weather patterns,” Francis Slingsby, in charge of DONG’s strategic partnerships, told Bacon’s Rebellion. Experience with the two demonstration turbines will guide design and construction of the estimated 2,000 turbines to come later. “When we put steel in the water,” he says, “we want to do it right.”

“We are excited to bring our expertise to America,” said Samuel Leupold, CEO of Wind Power at Dong Energy, in a prepared statement. (Leupold was unable to attend the announcement.) “This project will provide us vital experience in constructing an offshore project in the United States and serve as a stepping stone to a larger commercial-scale project between our companies in the future.”

Work on the project will begin immediately, and the two turbines are expected to go into operation by the end of 2020. The pace of construction will vary, depending upon factors such as weather and the migratory patterns of whales and other animals. The tips of the blades will reach higher than the Washington Monument, Dominion says, but simulations indicate that the turbines, located 26 miles from the shore, will not be visible to Virginia Beach beach goers.

A primary motive of building offshore wind is to provide an additional source of clean energy. While solar is taking off in Virginia, wind inside state borders has been relegated to small ridge-line projects in the western part of the state. The only way wind can be a major contributor to Virginia’s energy future is through development of off-shore wind.

Two thousand megawatts, if built, would be the rough equivalent to two state-of-the-art gas-burning power plants. The difference is that wind is not “dispatchable” — it generates power when the wind blows, not necessarily when Dominion needs it. Despite that drawback, the cost of offshore wind power is increasingly competitive with other sources, and utilities are increasingly confident they can handle the fluctuations in electricity output.

Assuming the two-turbine demonstration project turns out well, Dominion expects to phase in large-scale wind production in increments, Mark Mitchell, vice president-generation construction, told reporters. As turbines are added, the company would assess the ability of the Hampton Roads electric grid to accommodate the added volume of intermittent capacity. Dominion would make grid upgrades as needed.

McAuliffe has been a vocal proponent of renewable energy in Virginia. He also sees offshore wind as a potential economic boon for Hampton Roads. Over and above the potential for large-scale construction work, the Coastal Virginia Offshore Wind project would support hundreds of jobs in ongoing operations & maintenance.

Economic developers have touted the advantages of Hampton Roads, with its mid-Atlantic location, ports, and shipbuilding as a logical center for the U.S. off-shore wind industry.

“We’re optimistic, Virginia has what it takes” to attract companies in the wind-power supply chain, Slingsby said. However, he noted that the European wind-power industry has multiple industry clusters, so there was no reason to think that companies necessarily would concentrate in a single U.S. location like Hampton Roads. Factors that states can control are the ability to ramp up for a large-scale installation of wind turbines and to make skilled labor labor available. Wind farm technicians are one of the most exciting and fastest-growing blue collar occupations in the U.S. right now, he said.