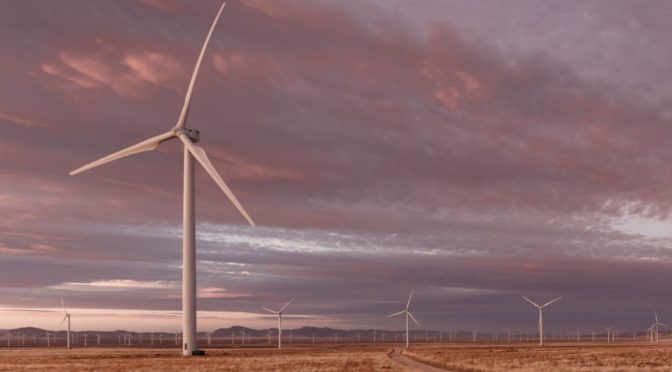 I’ve worked in the wind industry in one way or another for over a decade—but I’ve never been to WINDPOWER. I’ve spent my time in the field, building wind farms and climbing uptower for maintenance and repairs.

Along with my day-to-day job as a wind tech in Milford, Utah, I’m also the founder of Tower Climbing Grease Monkeys (TCGM). TCGM has helped thousands of techs from across the country connect on social media, where they share incredible photos and the tips and tricks of the trade.

A few months ago, I decided to start down a new path and make TCGM my full-time gig. And that lead to an invitation to my first WINDPOWER.

So, I hopped into my truck and packed up Ace, my German Short Hair Pointer, to head back to my hometown in California for the convention in Anaheim on Saturday.

It’s always good to head back home for a while so I can see family and friends.  We got there in about eight hours from Cedar City.  It was a great time to sit back and reflect on how far I have come over the years and where I’m heading now. Seems like just a few summers ago I was dreaming of the Tower Climbing Grease Monkeys and growing it to what it is now. Crazy how time flies and your efforts expand your possibilities.

On Monday morning I arrived at Suzlon’s golf tournament in Fulerton, about 20 minutes from the convention center. I arrived fully prepared to shoot the event with my camera gear, as I’m not much of a golfer.

Suzlon and the Coyote Hills Golf course were kind enough to let get a golf cart and document the event on social media for our nationwide wind tech audience. I had never been to something like this before, so I was shocked at the turnout and the overall energy. All of the attendees were pumped to play, with a mix of both pros and first-timers.

The cool thing was that all of the funds the event raised went to the Wind Energy Foundation, a “nonprofit organization dedicated to raising public awareness of wind as a clean, domestic energy source through communication, research, and education.”

Things on the course quickly heated up. I was zooming all over with my buddy Kevin taking slow motion videos, steady cam shots, and documenting the concentrating faces. There were contests for things like closest to the pin, longest drive and best shot. Shout out to the Skyspecs team for showing the most team spirit– they were having a great time and even busted out a rap for the TCGM Facebook page

Kevin and I eventually headed off to charge our equipment and get ready for our trip to Angels stadium for the opening reception and PAC fundraiser.

Later, along with my long-time friends and temporary videography assistants Kevin and Steven, I headed the Angels stadium for the official kick-off of the event.

Talk about a cool experience. As soon as we got there the energy was pumping. A whole section of the stadium reserved for the opening reception, full of food, drinks and socializing. After catching up with a bunch of old friends and making some new ones, I had a chance to go down to the field and throw the ball around a bit—made even more special since Steven and I grew up playing ball together. I had never been on a major-league field before. We also had a chance to hit the batting cages behind the dugout.

After a day of such unique experiences I needed a little rest, because WINDPOWER was officially starting the next day at the Anaheim convention center.