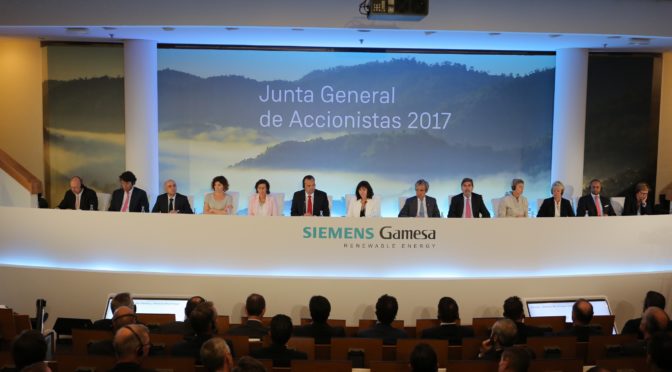 Today in Zamudio (Vizcaya, Spain), Siemens Gamesa held its first Shareholders General Meeting since creation of the new company deriving from the merger between Gamesa and Siemens Wind Power, which closed last April.

“I also regard it as a great honour and privilege to be here with all of you for the 2017 Shareholders’ General Meeting. Not only is it the first shareholders’ meeting for our newly-merged company, it is also my first opportunity to speak directly with all of you”, said Markus during his speech, going on to underline,

“The merger creating our company took place at precisely the right time. It gives us size and scale. Our objective, as I’ve said before, is not only to ‘compete’ in today’s competitive industry environment, but to win! We are now perfectly positioned to do that”.

During his speech, the new CEO overviewed Siemens Gamesa’s goals and priorities: firstly, guaranteeing business continuity so as to uphold the customer service standards for which it is known; secondly, ensuring a quick and smooth integration; and lastly, winning new business while maintaining profitability.

To achieve these goals, Markus stressed that the company boasts “a very strong global presence, underpinned by solid relationships with customers around the world and a broad global manufacturing footprint. We have some of the most reliable and efficient products in the industry. We have an installed base of 75 gigawatts, and a strong order book of 21 billion euros. And most importantly, we have a superb team of highly motivated and talented employees”.

Rosa García, meanwhile, Chairwoman of the recently-appointed Board of Directors, sought to highlight the fact that the merger between Gamesa and Siemens Wind Power is much more than the sum of its parts. “The marriage of our strengths makes us a benchmark player with global reach; underpinned by our successful track records, we are guaranteed a leading role in shaping the energy landscape of the future”.

She went on to explain that the highly complementary nature of the two companies, in terms of both geographical footprints and product and service portfolios, coupled with the commitment of the team and employees, “enables us to offer our customers a competitive proposition. These same strengths allow us to maximise value creation for you, our shareholders, and for the communities in which we operate, making us a better company to work at, one which generates wealth and jobs”.

Strategically committed to the Basque region and Navarra

Markus also stressed the importance of Siemens Gamesa’s roots in the Basque region, where Gamesa was founded, and Navarra, where it continues to have a strong presence. “These roots do not only apply to our own organization, but also to a very strong and growing network of Spanish suppliers. This has always been the case, and this will not change”, adding that “for any organization to grow and expand throughout the world, strong roots are essential”.

Rosa García, Chairwoman of the Board of Directors of Siemens Gamesa, similarly highlighted the new company’s “close ties” to Spain, particularly the Basque region and Navarra, where Siemens Gamesa has its head offices, noting that,  “the merger will allow us to go further in a shorter period of time, and without renouncing our roots or our core tenets”.

The shareholders also gave their approval for the change in the name of the company, which will now officially be known as Siemens Gamesa Renewable Energy, as well as granting greater flexibility regarding the the General Meeting venue: given the new company’s size, it will be possible to organise the event in Zamudio or Bilbao in the future.

Other items ratified included the change in the company’s fiscal year (it will now begin on 1 October and end on 30 September) and the payment of a cash dividend against 2016 profits of €0.11058 per share (payable from 5 July 2017). The shareholders also approved the 2016 financial statements and discharged the company’s management for the year.